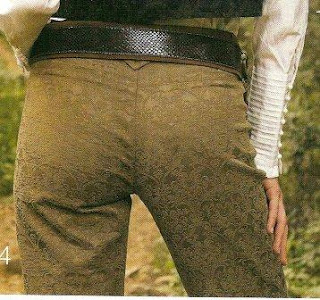 As said in a previous post, I really need some new pants and I managed to get three cut. And instead of sewing the most easy one first, which I originally wanted to do, I started sewing on the most complicated one. That's the Patrones pattern. As in BWOF the pictures just don't show the details clearly. I would think you want to see the single welt and the detail in the back, but a large belt hides these details in the magazine pictures.

For me this is the most complicated because it has
a. Single welt pockets
b. I've never made a Patrones pattern before.

The single welt pockets are not so difficult, but just a little more work than any other pocket.
Though the pattern seems quite in line with BWOF pants, (laid the pattern pieces on top of a TNT Burda pants) I cut with large seam allowances and traced the seamlines like I always do with tracing paper.

Other changes
Then I put together the pants yesterday evening with the largest straight stitch possible on my sewing machine.
The result is encouraging. Great fit (not bad it's a stretch fabric) and the only thing that needs alteration is making the waist a bit smaller in the front and attach the waistband a bit higher. The last is only for my own comfort, I just don't like low waistlines on me. Don't know if you can see it in the picture, but the waistline is also machine basted in a lighter color. The uneven part on my right side is the pocket facing, that still extends above the waist. I hadn't even finished the pocket insides when this picture was taken. The wrinkles are from sitting behind my desk in a too much time consuming effort to re-establish the internet connection for DH, who liked my pants very much.