How to sew a fly front zipper (including pocket lining) 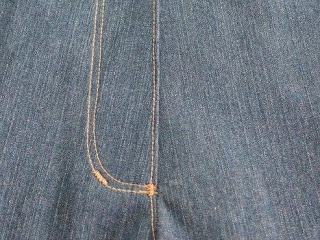 There are several variations and a lot of tutorials on how to sew a fly front in a pair of jeans/pants. This is my take on it, a combination of how I learned it long ago, instructions for Jalie jeans, a video tutorial by Jennifer Stern (which I can't find now) and just doing it for a long time now.

The steps that I show:

The steps:
Fold the fly (it usually is a pattern piece that is cut on the fold) and finish the seams. Sew the zipper on top, stitching only the side that's closest to the finished edge. (My zipper is a bit longer than necessary, I'll cut it shorter after attaching the waist band)

Finish the seams of the front pattern pieces. I use a cut-on facing on the right side, the overlapping side on a womens' pair of pants. If you prefer you can use a separate facing, you'll have to sew that on as a separate step. 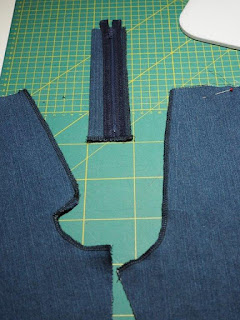 Pin the pocket/lining in place, the left side has the small amount of seam allowance as described above. (if your pockets are not extended to center front, omit this step) 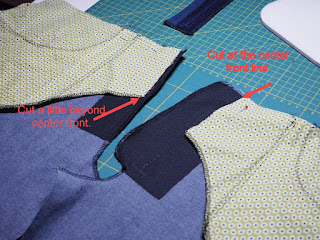 Sew the center front until the point where the zipper will end. 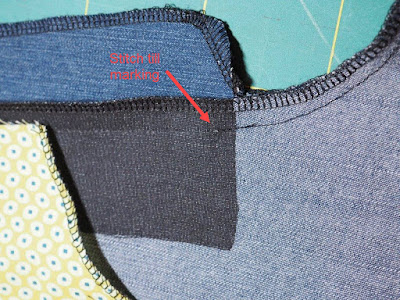 Fold and press the right side on the center line. Make sure the pocket on the inside is aligned with center front. Topstitch till the crotch. 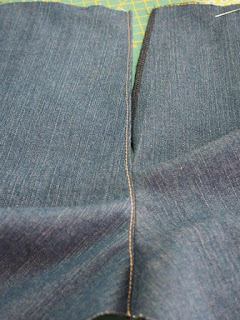 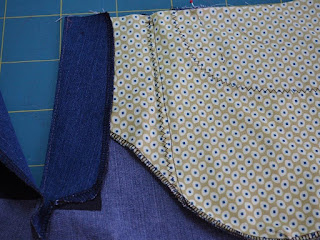 I like to sew in the zipper a little off-center. Fold the left 0.5 cm beyond the center and press. Pin the zipper with the fly in place. Sew on the edge. 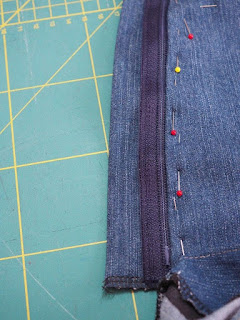 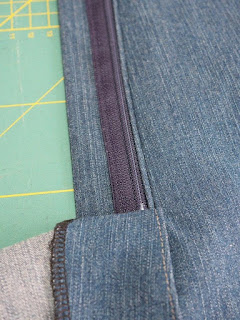 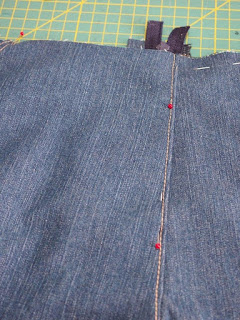 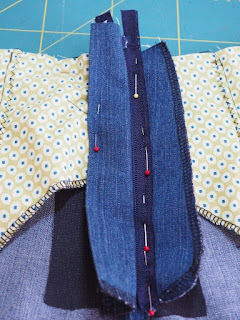 I mark the end of my zipper with chalk, placing a pin to mark first. This way I know where the end of the zipper is. Especially important if you use a metal zipper, which would break your needle if you would hit in while topstitching. 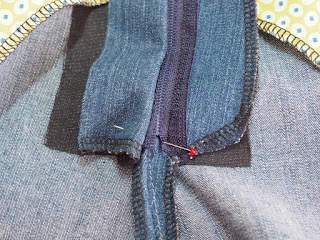 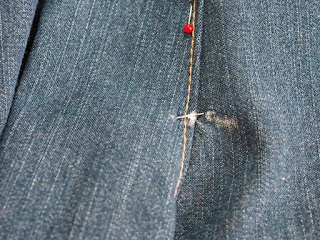 With chalk I mark the topstitching line. 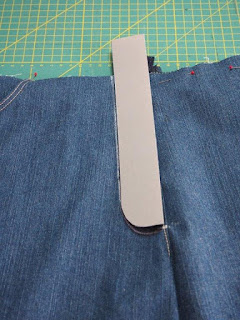 Topstitching on the inside, normal thread so not very visible. Notice the topstitching is only on the facing, not on the zipper tape. 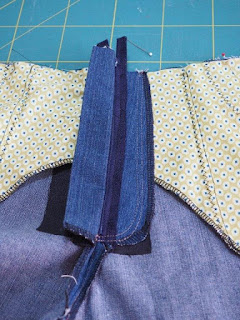 Fold the fly in place and sew a few bar tacks. 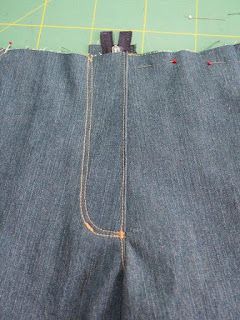 Inside after making bar tacks. At the top of the photo you see the chalk marker and the little brush I use to remove the chalk lines. 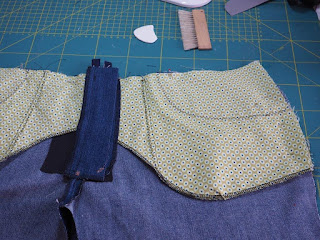 Jacket and a pair of pants

Accounting for two other garments from Burda magazine: a pair of pants and a jacket.
The jacket is from the June 2018 issue, number 104. 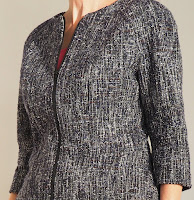 Think that I said it already: I have quite a few projects that never have been published on this blog. Sometimes this bothers me, as my blog is also a personal story of my sewing journey. When I see blog posts that I have written, say 8-10 years ago it sometimes strikes me that I have forgotten about a project or see a project that was loved, but worn out in the meantime. I like this keeping track of my projects, so I decided to try to publish more of my projects, even if it's something that it's not very interesting to others.
In this post photos of my coat, of which I published construction photos here and some random photos of a few projects made in the past few months.

Tracing and marking a pair of pants from December Burda

Hmm, could the title be longer? This post is exactly about what the title says. I started making a pair of pants from the Burda december issue and in this post will show you how I use a pattern from the magazine.
A short aside: a comment was made yesterday on my post on the missing cutting layouts that Burda will bring them back in the March issue (see here (text in German), thanks Beate for sharing this information and Burda for listening to their readers!).

This is the pair of pants I'm making, omitting the flap in the waist. It's pattern number 102 from the December 2018 issue and available as pdf from the Burda site: Link to the pattern. 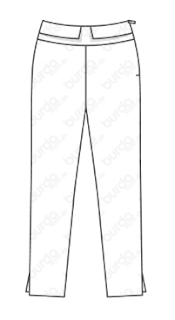 A very easy pattern, 4 pattern pieces and made in a stretch fabric. It's more close fitting/slim fit than I would normally make. I intend to wear it with a longer cardigan,

How to insert an invisible zipper (without pucker) 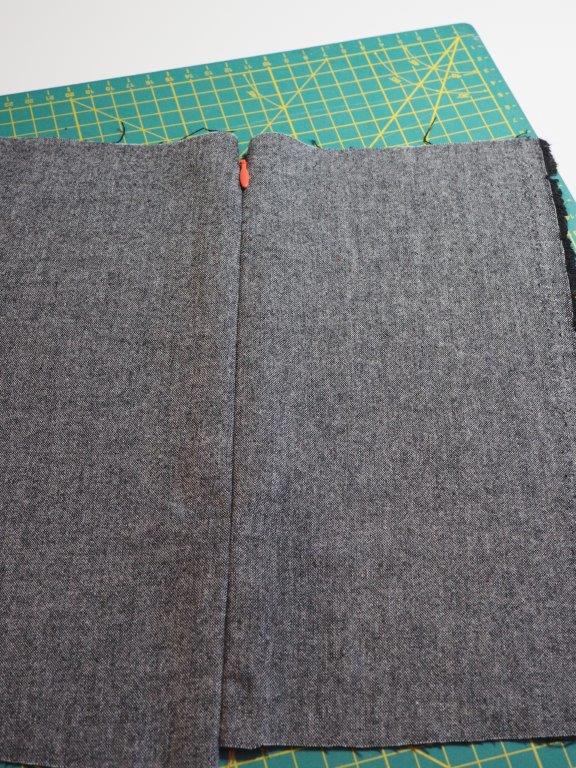 After the test post (thank you for your input, I'm debating/considering options) let's get back to sewing.

A while ago I learned about a great, yet simple technique to avoid the little pucker at the end of an invisible zipper. I insert my zipper this way all the time. Though the trick is at the last step of inserting the zipper, I include all steps I do for inserting a zipper.
Disclaimer: as always when I do a tutorial, there are more ways to do it, this is just my take on it.

Test (for partial readability in feeds)

My posts are irregular at the moment, to say the least. I've quite a backlog of projects that were not mentioned here, either because they're not really interesting material or just because the time lacked to make proper pictures in good light.
I read quite a few blogs through Bloglovin but was wondering why I sometimes see a complete post, sometimes only a few lines and have to click on "See original post" to go to the blog.