If you’ve seen this post before without text: I clicked the wrong button and uploaded the post accidentally that only contained pictures.

This fabric spoke to me (loudly!) when I was at a fabric market this spring. I passed the stall once, but when I passed it a second time I could  not resist and bought it. It’s a 100% linen fabric, which I love to wear in summer. I lined it with a viscose (rayon) good quality lining and it’s ever so comfortable.

The pattern is self drafted based on the sloper from the Suzy Furrer class and boat neck instructions from her class as well. As instructed I used the lower point for rotating the darts (for those interested/having experience with her method). Next time I would reposition the bust dart again and have it at the higher point. In this rather busy print it’s not that obvious, but I think it’s a bit low.

This photo reminds me of the fact that I still have to sew the lining to the slit in the back (and no, I’m not that addicted to my phone , it’s my remote for my camera)

The shoulder dart is kept for shape and has to remain in the facing too. As I do usually I made the facing a top layer of the lining and did not make a separate lining pattern. I just sew the seams of the lining giving a bit more space, this way there won’t be any stress on the garment. It sounds strange, but the lining is slightly larger in circumference than the actual dress. 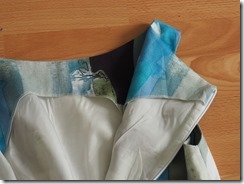 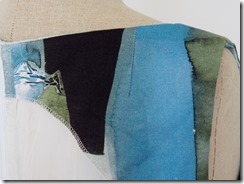 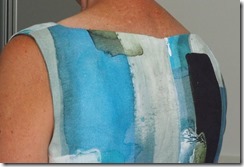 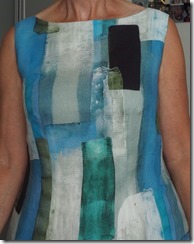 Though I admit that default seam allowances to pattern pieces can be very useful when the seams are long and more or less straight, most of the time I prefer to mark the exact seam lines on my fabric. Especially when the seams have short curves, like a neckline, armhole or princess seam. The same is true for darts: I like to know exactly where the lines on the pattern were (or where I drafted them) and don’t want to rely on pins or tacks with basting thread.

My preferred way of marking is with carbon paper. I know I’ve written about it before but it’s a long time ago. Apart from the carbon paper, which is also called wax paper, you need a tracing wheel and a table or flat surface you can put the paper on. I use a cutting mat for it. 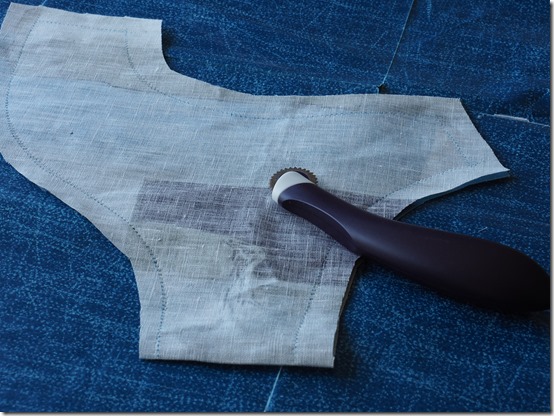 The way it’s done is marking the pieces first while the pattern is still attached to the fabric, then you take the paper off, flip the fabric over to the other side and retrace again over the lines you made. I use this for almost all patterns that don’t include seam allowances. On those that have seam allowances I mark the notches and other significant marks on the pattern this way. The above pattern piece is a facing of a dress that I drafted and I haven’t added seam allowances to the pattern.

The paper is years old, taped on the back side and still very useful. It will last a very long time. There are of course exceptions to the use of it: sheer fabric and white are difficult fabrics for this. For white I will use white wax paper. Much less clear to see but I don’t want the risk of the marking showing. If in doubt you should always test it first. 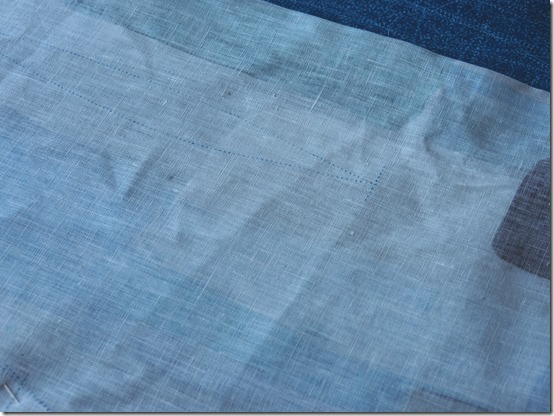 For the darts I mark the end points with a small line too.

I learned to sew with exact seam lines (though by basting them, which is a very time consuming job) and like I said before, it’s what I prefer. The pictures above are from a dress I’m making right now. Hope to show you that soon.

Last Saturday I had the pleasure of meeting Jane from the blog Lucky Sew and Sew. I’ve been following her blog for years and when I learned she was coming to Amsterdam I couldn’t pass on the opportunity and asked whether it was possible to meet. Lucky me, she liked the idea to meet too and her husband didn’t mind to be on his own for a couple of hours (lovely man) so the arrangement was easily made. Jane was curious to see the famous Kantje Boord lingerie fabric shop so that’s where we met. Needless to say we spent quite a bit of time there and of course fabrics and notions came home with us too. Jane was wearing one of her lovely tops that she showed in her last post before her trip, looking great and ever so comfortable for travelling. Thank you Jane for taking the time to meet, I enjoyed every minute of it. 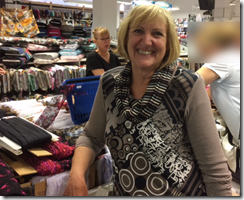 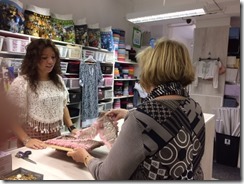 My haul did include these beautiful combinations. I hadn’t been to the shop for quite a while and it was inspiring to go there again. These fabrics are shouting at me to be made soon (they’re not used in my next project though).n

A lace border with lace fabric to match. 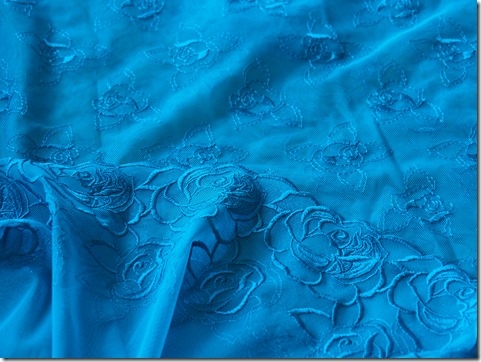 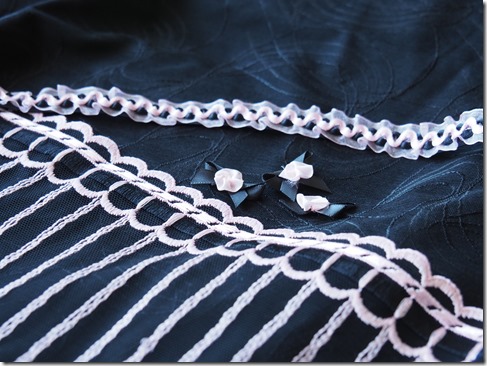 It’s been a while since I made a bra and it is more than time to make a few new sets. This is my first bra of what I hope will be at least 3 new sets in the next few weeks. It still lacks a bow as I’ve forgotten to take one with me (being abroad for the moment on a lovely holiday). But I’m ever so happy that the fit is very good, as I’ve been struggling with that recently. 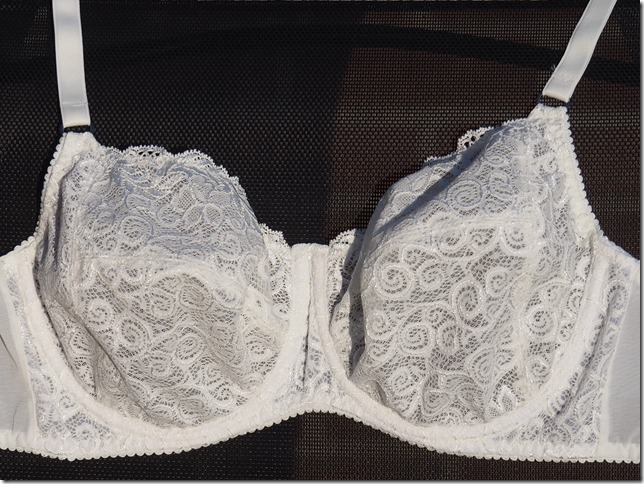 It’s made of lace which I underlined with a tule to give it the strength I need. Only the plain part of the band you see is stretching. It’s a kind of powernet.
The pattern is a copy from a rtw bra with adaptions, as I was not happy with the fit of that one any more either. 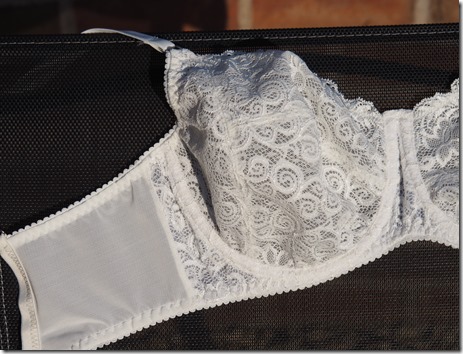 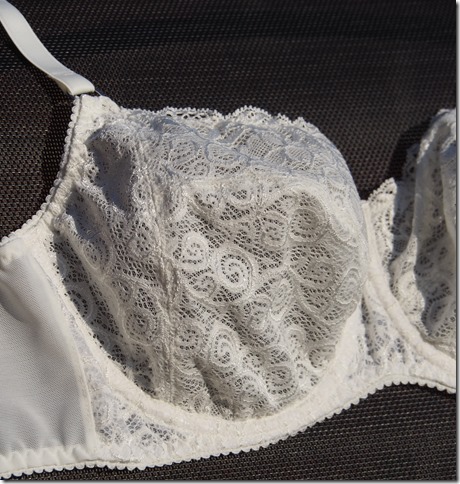 The inside. I hope you can see that there are two layers of fabric in the cups too. The tule that I used for the bridge and side of the cup is more sturdy and more white than the other fabrics. It doesn’t worry me as it does not show from the right side. 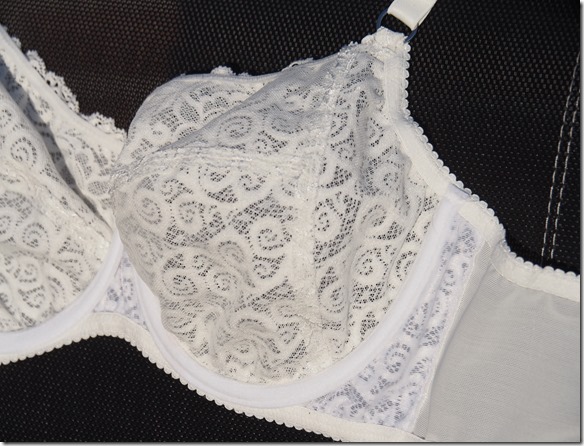 I tried something new with construction and used Vliesofix (similar or the same as bondaweb?) to bond the lace and tule together. I’ve very often used two layers of fabric, using different ways to keep them together but this worked so easy. The two layers could very easily be treated as one during sewing. It’s not visible at all.
I’m expecting the glue in between will dissolve after a while, which is fine I think, as this is not where the strength comes from.
Parting shot of a view we had during one of our walks. It’s not sewing that is the main activity of this holiday (which is almost over, a few more days). 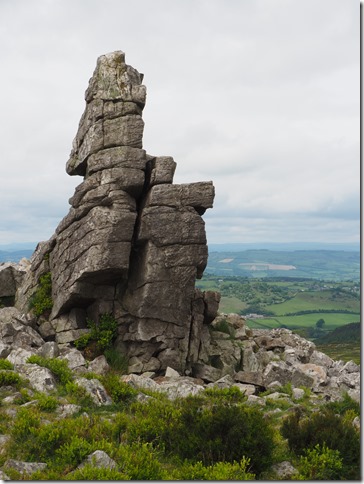