Jacket modeled on me

I have a few catch-up posts to do. Let me start with a post with only a few words. This is the jacket I finished a month ago but didn't yet show wearing it.
I'm very pleased with it and have worn it a few times already. The sewing details are in the previous post. 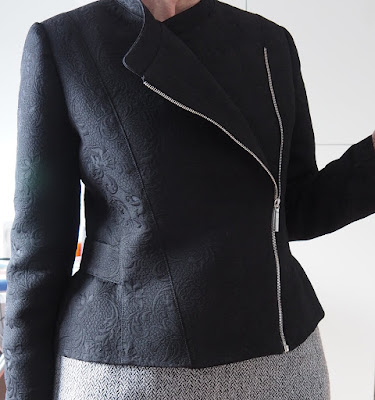 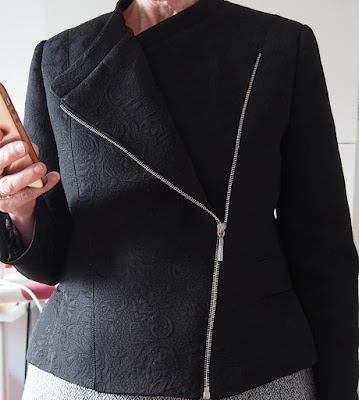 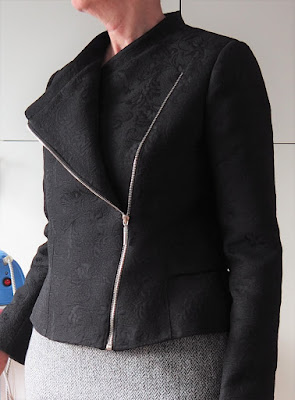 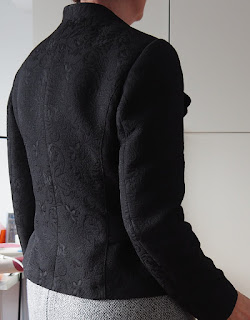 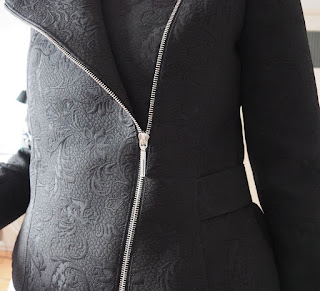 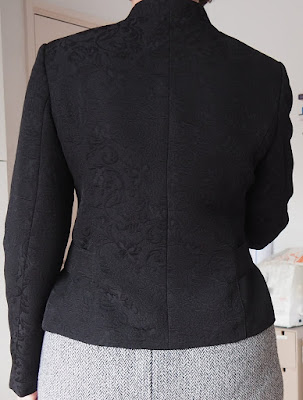 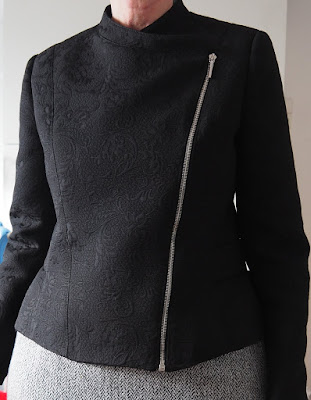 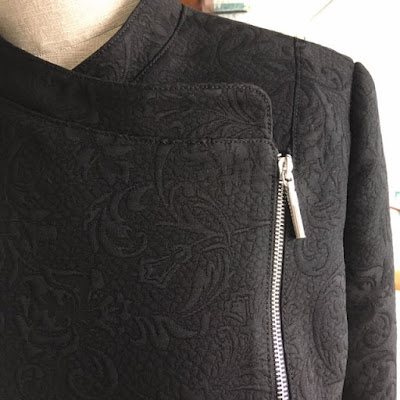 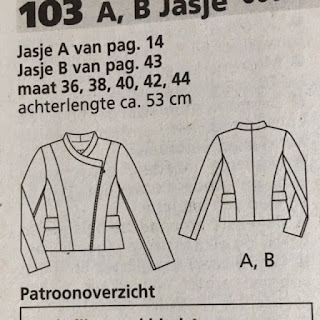 Though the muslin of the Knip Mode jacket was a huge disappointment I was still in a jacket sewing mood. I spent an evening trying to draft that jacket myself but it was too complicated. I do have some pattern drafting skills, but this was out of my league.
Then February Burda came along with this pattern. Not as complicated but still lovely lines. Add to this my confidence in their consistent pattern drafting and I was on my way tracing this pattern.

I compared the traced pattern to my sloper and added a little bit to the hip area and made it up in the fashion fabric immediately. My fabric was 1.50 meter wide, a little wider than the fabric used in the magazine and I managed to cut this from only 1.55 meter of fabric. You can see that some pieces are rather close to each other, I defnitely did not use 5/8 inch seam allowances! The only change I had to do was cutting the center back facing with a seam instead of on the fold. Minor issue in my opinion. 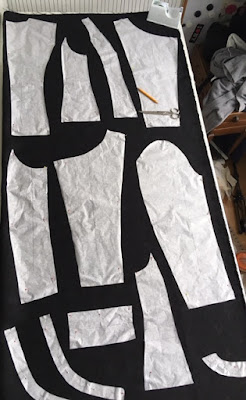 This is the fabric I used, bought at Croft Mill Fabric. 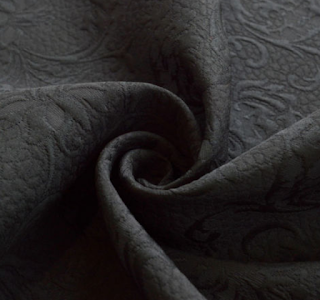 Construction was pretty straightforward. As most of you know I construct my jackets with a bit more internal structure than instructions in general tell you. This jacket has a shoulder shield (see picture), sleeveheads and a thin shoulder pad. The last two I forgot to take a photo of. 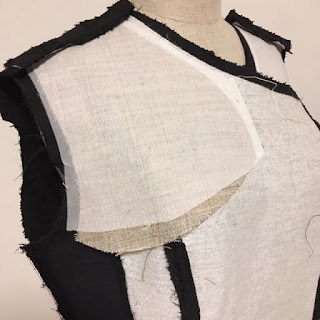 This "belt" is a nice detail and waist accent. Found this lining that suited the jacket very well. Any plain lining would have been fine of course. 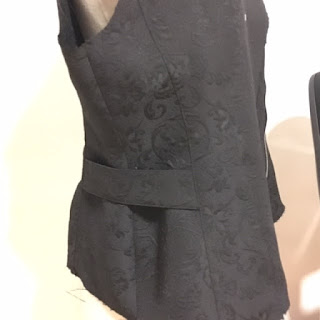 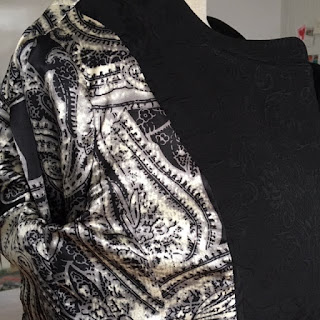 Partly unzipped. The zipper was taken from a skirt I made a couple of years ago. It was still in mint condition while the fabric of the skirt was turning from black to grey. It even has a bit more of a story, because I bought this Riri zipper when I was in New York and met Nancy K again. Quite a few years ago now, wish I could do it again. Wish I could find this more special zippers locally too but never found a source for them. 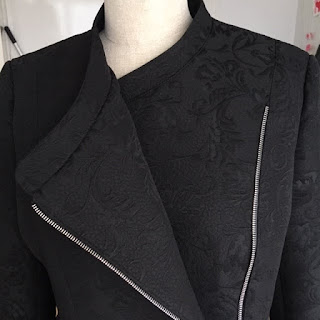 Now I'm working on an easy project, here's a sneak peek. A dress from Burda January 2019. I was just too tired to put the sleeves in tonight. 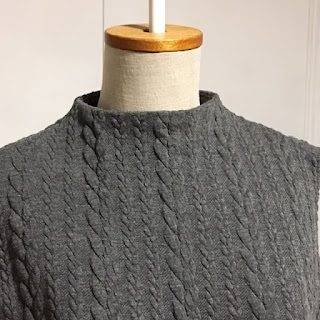 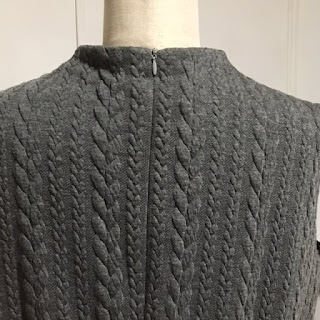 These two tops I made recently. The pattern is Jalie 2449, a faux wrap top. I bought and made this pattern for the first time in 2007. It's no longer available.

I bought the wonderful blue/white border print at Croft Mill fabric in the UK and thinking about how to use it I remembered a famous wrap top from BurdaStyle January 2008. There was not enough fabric for that one and rummaging through my patterns I found this one again. I liked it so much that I made another one. 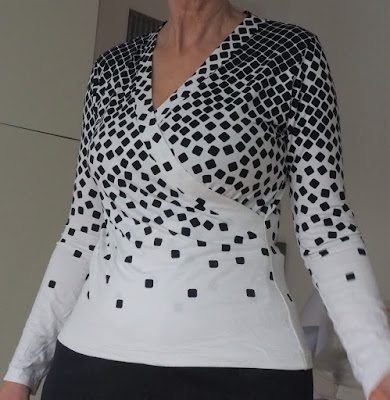 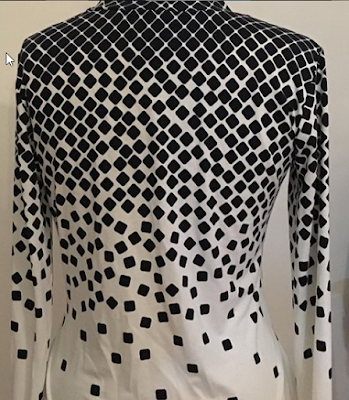 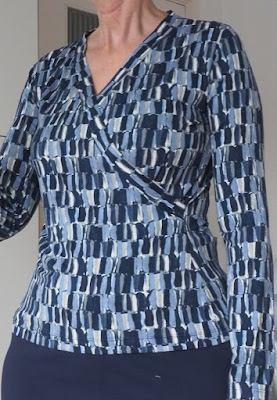 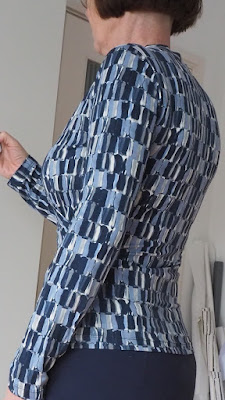 On the second version The neckline is heightened about 1 cm above the bust, giving just a bit more coverage. It's a minimal change. Other than that I used the pattern as it was traced/changed in my pattern stash. It had notes on it and at the time I made it a bit longer and widened the sleeves. 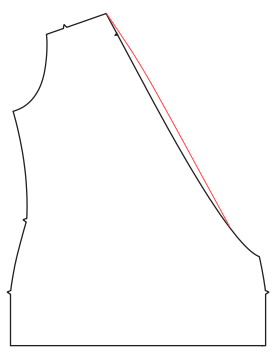 Sewing a top like this is an afternoon project ;).

For the record I'm publishing these photos. I know the design lines are difficult to see, especially in the front because I used a remnant piece of dark navy linen and because there was not enough of it a piece of muslin fabric in the back.  You can see that it's straight down at the front and back. By the size chart I'm a size 42 in the bus area and I used 40 because of my narrow back. My reason was that I could do an FBA easier than changing the width of the back. On the back it's still too wide and there's no need for an FBA.
Of course I graded out at the hip area. There's more than enough ease in this area, even though I'm the largest size in the middle set of hip circumferences (see my post from yesterday). Imagine this circumference at the hips for someone whose hip size is 12 centimeters smaller! 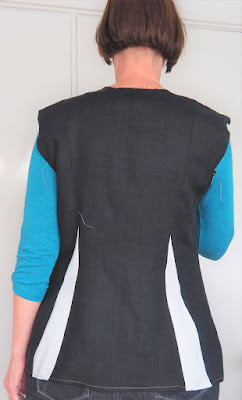 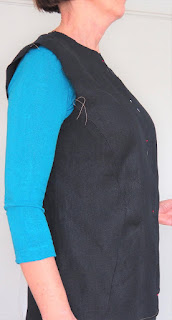 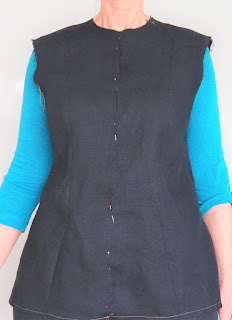 I'm still loving the design and despite this thinking of a way to make it work for me. Perhaps I have to draw it based on my sloper. Not this week though.

I don't have confidence in the "drafting adjusted to the size chart" from Knip mode. Back to Burda and Ottobre!
op January 20, 2020 2 comments:

The new Knip Mode drafting to the size chart - a rant

Probably the title of this post says enough. This post is a rant and I completely understand if you click away and read something more interesting.

As I said in my last post Knip mode claims they changed the way their patterns are drafted to make sure they have a better fit. Because of this I started making a muslin of the jacket. So glad I didn't take my good fabric to start with.
I made the body and am that disappointed that I probably won't bother to attach the sleeves or the collar. It's basically shapeless, as on the model in the magazine. So perhaps I should have known better from the start. But the line drawing showed such nice shaping....

For me it's totally unclear how Knip Mode thinks their patterns will fit better. This is what it says in the magazine: The fit of the patterns is optimized. The patterns used to be big and are now better adjusted to the size chart. The size chart is unaltered.

Below is a photo of one of the pattern pieces where you can clearly see the lines for the 3 groups of sizes. It's the same for all pattern pieces in the hip area. In the shoulder/bust area there are individual lines per size. The fit in that area is better, but it all ends with a waist/hip pattern in 3 sizes.

Last point of attention is that size 40 is probably not in the right group. On other pattern pieces the size 40 line ends up in the line for sizes 34-38.

Enough said, I think I will call it a day on this jacket pattern and will not buy Knip Mode for a long while. I will make a photo of the muslin in its present state, even if it's just for the record.
op January 19, 2020 14 comments:

How fast do you sew?

The new issue of Knip mode has a pattern for a jacket that has my name written on it. One of my sewing friends posted the technical drawing in our whatsapp group yesterday and I bought the issue the same day when doing my grocery shopping. The fabric it's made of isn't showing it very well and on the model it looks a bit shapeless, but I love these lines.

It has an intriguing description: an outstanding jacket with special design lines. It needs advanced sewing skills and at least an afternoon of sewing. 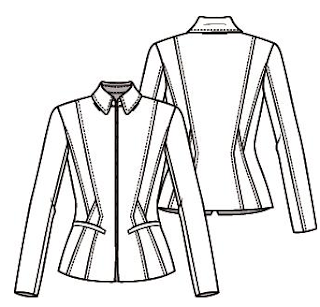 In which world is this ever "an afternoon of sewing"????? Tracing and cutting will take up that afternoon (at least!). Putting it together, topstitching, single welt pockets, hook and eye closures, collar with stand.....

I'm planning to make a muslin this time, as Knip Mode has changed its sizing and now claims to be drafting to the size chart more exactly. Read: not as much ease as there used to be.
If it works out as I hope I will probably use zippers for the center front closing and pockets. I'll use a different type of fabric too.
op January 16, 2020 27 comments:

I started to write about blogging in general, inspired by Bunny's post on blogging, but have deleted it all. Too many words and I'm realising I'm mainly thankful to be part of this amazing community. It gave me real friends too, both near and far and even a group of sewing friends I share a week of sewing with each year (next one is already in the agenda!).

Bunny's post made me realise too that it's been a long time again since I posted, without intending to leave so much time in between. December is of course a busy time for most of us and January... well, I can't wait till it's over and days are getting longer.

I'm certainly not planning to put a schedule on my blog posts, but will try to document my sewing a bit more. Let's start with one of my recent makes, a skirt from the May 2012 Burda issue.

One of my sewing friends traced it for me (thanks Viv) as I didn't have the issue.
Though it looks like a wrap, initially I thought it was, it's a pegged pencil skirt with some lovely features: 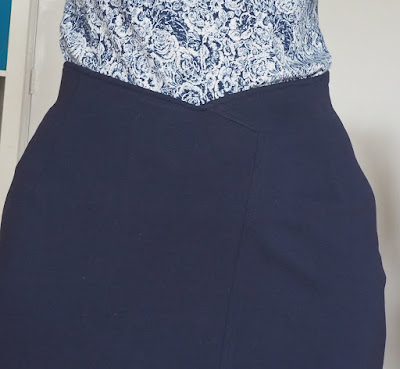 I made it in a heavy ponte knit in size 42. I ended up making it shorter and taking in the waist a lot. Think it was at least two sizes. As you can see in the first photo, which is not the most flattering, but the one where you can see the detail best, my difference in waist/hip ratio is substantial.
When I had sewn the base of the skirt and only had to do the facings, I tried it on, not having altered the depth of the darts. It looked ok and I finished it, including top-stitching.

The horror of putting it on then. It was far too wide in the waist. Probably it had set a bit lower when I tried it on. It meant taking all the topstitching out, taking the waist in by sewing wider darts AND making seam lines in the facing to remove the extra width.
Something that would have make me throw it in the wastebin when I was younger...(my mother knows!) but now I'm really happy I didn't. 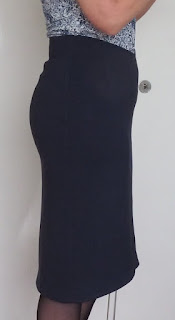 Dark blue is difficult to make photos from, It's close fitting but the ponte knit makes it quite comfortable.
op January 14, 2020 14 comments: