I've made the difficult decision to stop blogging. After more than 2 years it's enough and I'm going to spend less time at my computer for sewing related subjects and will be sewing without publishing about it on my blog. All in all it's taking up quite a bit of time, I'm going to spend that time otherwise.

I intend to keep writing reviews at Pattern Review. In blogland I'll be lurking, and not actively comment, at least for now.

The Chanel-style jacket will be posted in the sew-along, which I find very inspiring.

Thank you all for reading my blog, and I want to thank especially those of you who made (regular) comments. As most bloggers I loved to read the comments, you made me really feel part of the sewing community.

Happy sewing to all of you,
Sigrid

ETA: thank you so much for all your kind comments on this post. I'm very touched to read them.

I have no intention to close the sewing tutorials blog and will try to keep it (more or less) up to date. My blogs and the information that is in it will remain accessible.
op September 13, 2009 62 comments:

Not much to show, but as I want to keep track of what I'm doing for myself yet another jacket post. 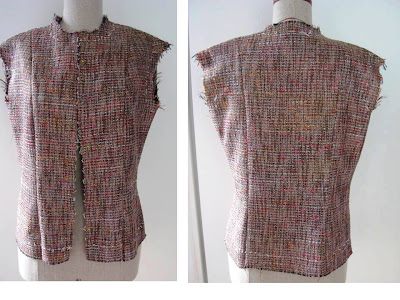 I tried the quilting with the lining but my fabric is not thick enough for that. Using a brown/grey thread didn't show the thread really, but it showed unevenness, though I used a walking foot for stitching. I tried a few rows on the upper sleeve, but took it all out again.

Time for another approach. The fabric could use some interfacing now it wouldn't be quilted. What to use? I had two options in my supplies and after testing on a scrap of fabric I used Pro-sheer elegance from SewExciting. Like Pam says on her website, it barely effects the drape of the fabric, yet it gives a bit of support. For me this was the first time that I used this interfacing, and want more, it's very good.

All vertical seams are now done, The shoulder seams I only basted. Mostly I'll use the construction technique that was described in Threads magazine no. 128, with a little variation.

I checked the fit and it's good, considering that the sleeves are not set in yet and the seams are only lighty pressed.

On the pictures you can see that I thread traced the pieces with a double tracing thread (I did cut my fabric in a double layer). I fused the interfacing between those lines and take out the threads before stitching (had I known before that I would interface the pieces, I would have worked different).

Next step is trimming the very wide seam allowances and catch stitch them. I did that on a jacket I've sewn last year, and found that it made sure the seams didn't show. 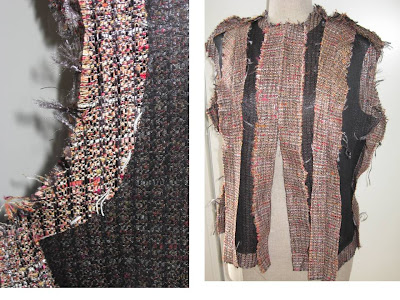 A few reactions to the comments on the trim: Ruta: thanks for mentioning the store in Utrecht, I will certainly go there (though won't make it in time for this jacket). Katherine H, thanks for pointing to the alternatives for trim, your jacket is wonderful, very special with the trim. And KayB: I'm not offended by your comment, I do like the honest opinion. I'm doing the crocheting now with longer treads (bought extra fabric) and in the final version there will be no threads hanging out of the trim.

This weekend I cut my jacket from the good fabric. I still need to thread-trace all pieces.

Having the little bits and pieces as remnants of the fabric gave me the opportunity to experiment with the yarn to make trims. From the start I wanted to try to make my own trim. First because buying trims is difficult here (no specialized stores that I know of, and choice of trims very, very limited) and second because I like to have a more casual trim, as this suits my lifestyle better. No need for very formal clothing.

I've made several small experiments, all with the weft threads of the fabric. Most of them were no success. I'll show you the one I'm contemplating using.

Below picture shows the warp threads clearly, which are black and grey. I've taken out the weft threads to make the trim.

The pictures don't do the colors justice. 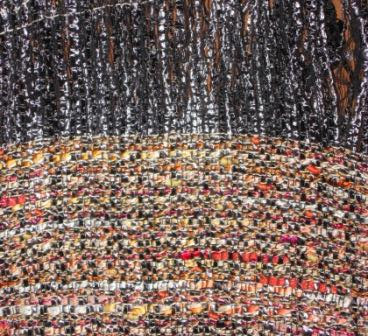 The black thread is made from a knot of special yarn, of which I crotcheted a strand with two threads, I used black because I want to emphasize that color a bit in the fabric, over the brown that is also in it. The other two are crotcheted with the weft threads of the fabric. 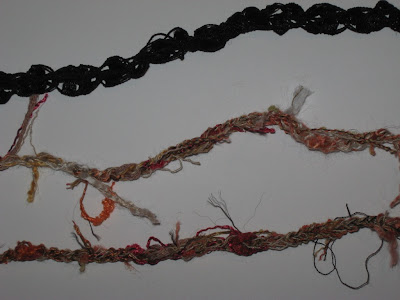 The result of three strands of threads in a braid. As I have relatively short ends of threads, there are a lot of thread ends. I'm not quite sure about this trim, it is a lot of work, and I think I will have to buy a little extra fabric if I want to do this for the whole jacket. I'll let it lay around for a day or two to make up my mind. 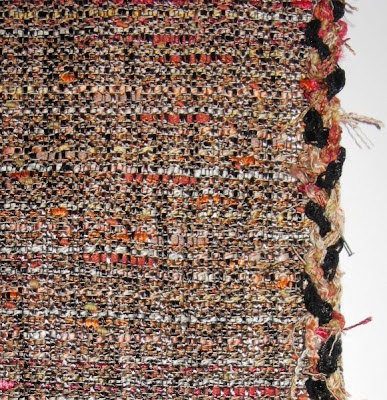 Browsing on the net this week I found this article on machine tension on the Threads website with something completely new to me:

"Be sure your presser foot is down when you make the tension adjustment."

This is an eyeopener to me. I tried it and it really seems to work better than with the presser foot up. I never thought of this making a difference and sure have never heard about this. Did you know?

For more information on the subject see the original article.

Laura, thank you very much for your timely comment. I saw it just before I went to my sewing room to cut a new muslin! I had traced the size 12, tapering down to 14 and did the fba when I read your comment and thought "I will try that first". A little later this is the result.

I was happy with all comments of course, and the general opinion was (like I thought too) that I could have started with size 12 in the shoulder/neck part. Again, only the right side of the jacket is changed.

I'm wearing a thin lambswool top underneath, and think I won't wear anything with more thickness under this jacket. It feels a bit snug, but like Lindsay T said, this is meant to be a snug fitted jacket. Am I ready to cut in the real fabric?

On the right is the new adapted version. For comparison I have put the pictures side by side. 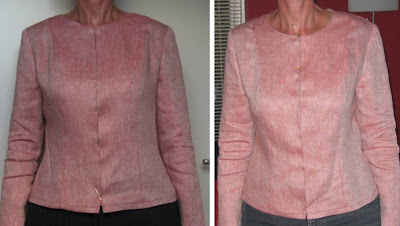 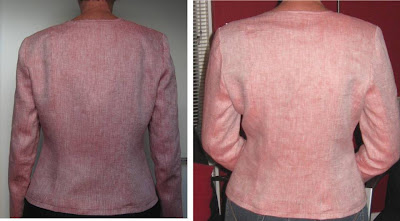 First let me thank you for your advice on treating my fabric. Special thanks to Marie-Christine for her extensive reply. She could well be right that it could be washed, but I think that will follow the majority and only steam the fabric. I'm too afraid it will not be the same after washing. But I'll follow her advice next time when I do have some extra fabric to test with.

I'v decided on the classic Vogue pattern 7975, view B (short length, long sleeves, no overlapping center front). I ordered it this weekend and it arrived Tuesday (from Naaipatronen who have 25% discount this month on Vogue patterns, the price then is still much higher than my US readers pay, but shipping isn't as high). Time to make a muslin. I realize that you haven't seen the progress on the dress yet, but that will come later. 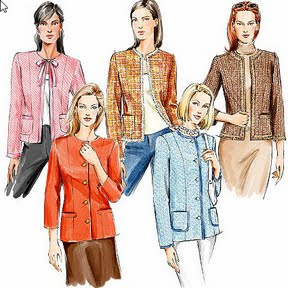 I started with a size 14. On the pattern a final bust circumference of 105 cm is indicated, what I thought would be enough ease (8 cm). By size chart I would need 16, with a final measurement of 110 cm.

In the pictures the left side of the jacket (my left side) is the original size 14. I have taken space out of the upper half of the princess seam both in the front and in the back, because of too much space in the shoulder area and back. Think it should be a bit more, but the shoulder width seems ok now. I used a small shoulderpad, simply need that with my sloping shoulders.

What do you think? When I put the muslin on I thought it was OK, but seeing the pictures I'm thinking I should cut a size 12 for the upper part and do an FBA.

For time reasons I will not be sewing this one in the classic Chanel way. It seems that you need 100-200 hours for that, and I want this one to be ready three weeks from now. Though I can't see needing more than 100 hours when you machine quilt the pieces.

(This fabric gets wrinkles when you only look at it!) 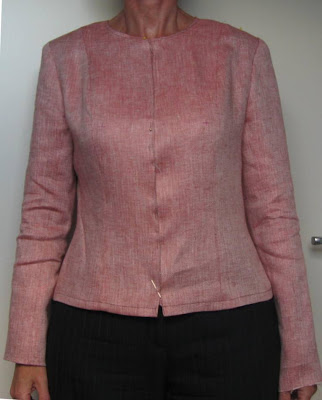 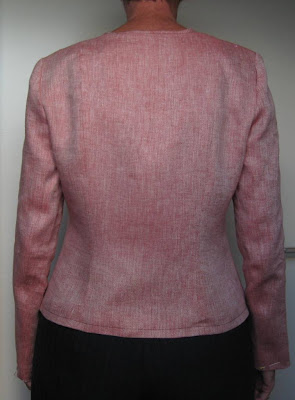 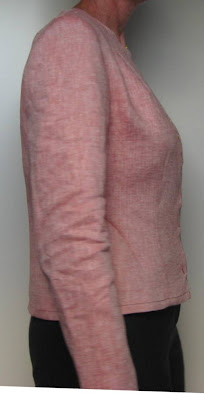 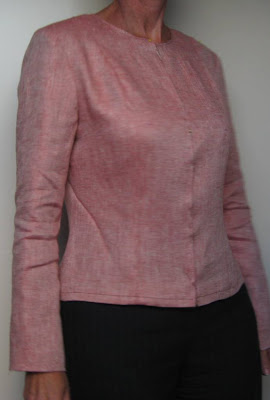 How do I pretreat this fabric? 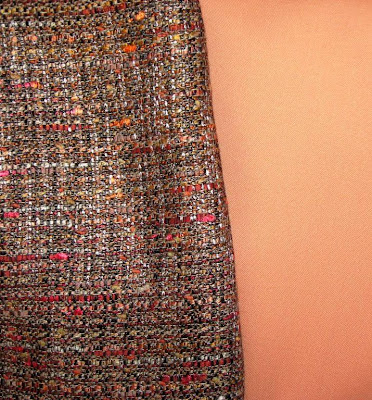 The bouclé fabric is made of silk (at least 90% of the fabric) and I'm much inclined to sew it without pretreating the fabric in any way. I'm afraid the fabric will not have the same beautiful shine after washing it or will otherwise change.

Furthermore it's an expensive piece of fabric, and I just bought enough to make a short Chanel style jacket. I don't have any length to test with.

What should I do? I'd appreciate your opinion.