Apart from showing you two fabrics at the end, this is a non sewing post. My inner battery has reloaded, it’s been a lovely holiday, even if the weather wasn’t always cooperative. Also no inclination for blogging (apart from the one post in the first week), though I intended to, but normal life was far away, which is a good thing in my opinion.

We went to the south of France, due to family circumstances shorter than we planned. These pictures are from a walk we did there. 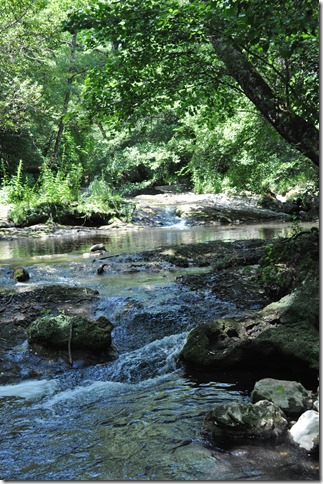 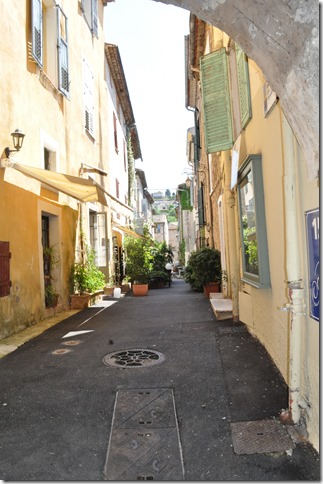 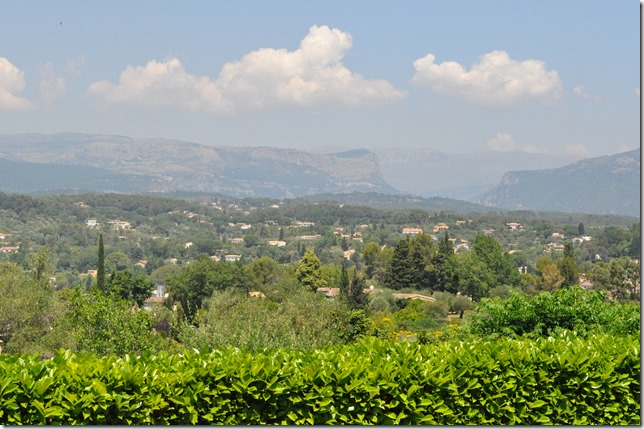 On to Italy, where our children joined us for a couple of days. They were all about making non-standard photos. So here’s my family. Some of you might remember pictures of my daughter in a jacket I made for her when she was 14. She’s almost 22 now and nearly finished her studies. My son is 19 and doing a traineeship with a radio station for his studies. I’m quite proud of them. 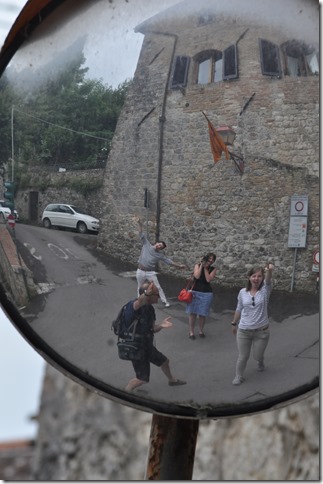 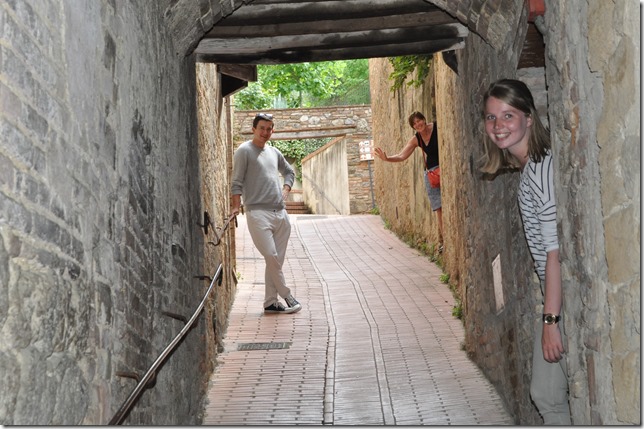 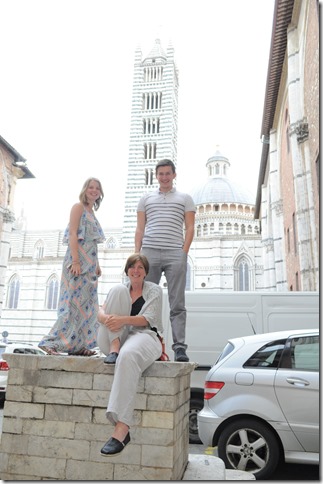 A picture of mr Sigrid too, and a proof of me wearing the dress I made ;). 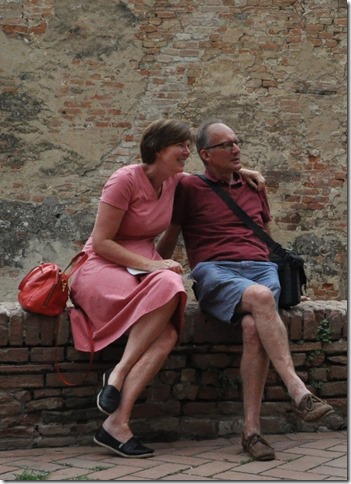 The view from the Torre del Mangia in Siena (400 steps up). 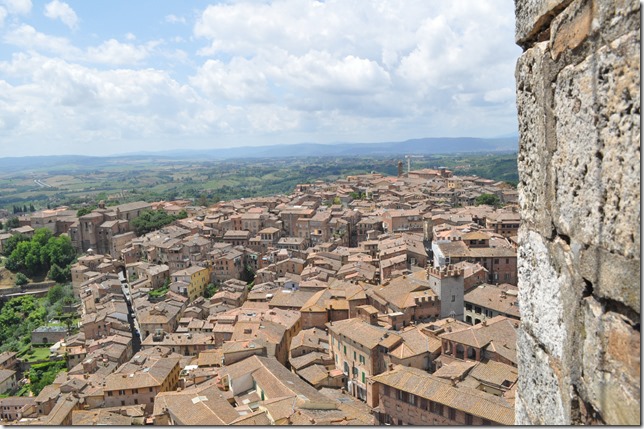 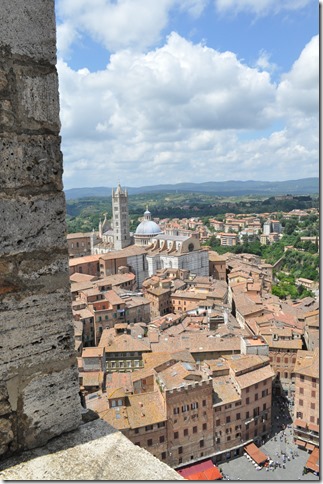 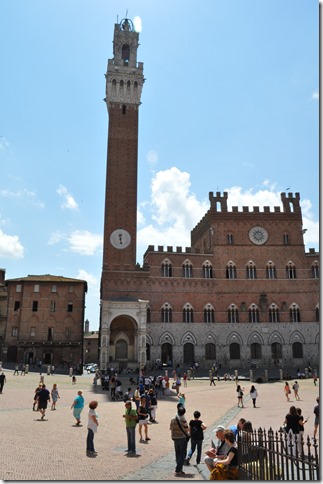 On the way back we were in Germany and there is where I bought two remnant pieces of fabric. I’ve hardly been looking for fabrics as I’ve so much that still has to be sewn, but one can’t resist a good bargain, can you? 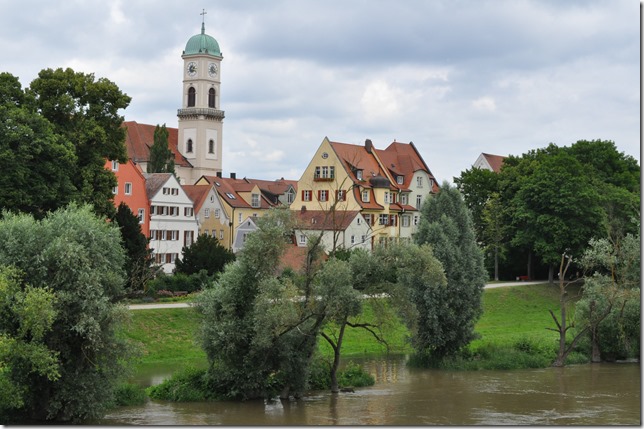 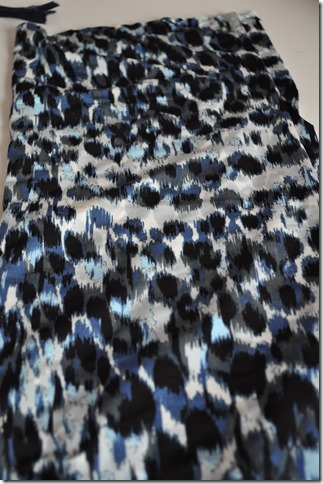 Above a lycra which will be used in lingerie, below a cotton/silk blend (Vogue is printed on the side), just enough for a summer top. The fabric was very much “me”. 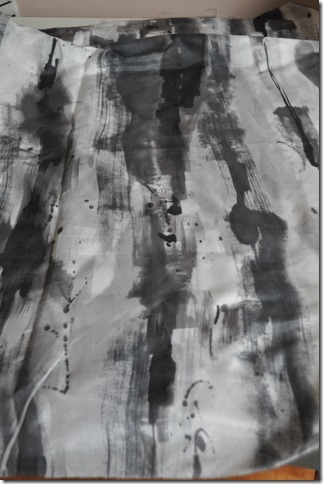 Till next time, with some proper sewing stories.

Today we had this magnificent view. The weather was not very bright but still the view was wonderful. This is from the lovely city Mougins, the old village is an art centre and there were a lot of outdoor sculptures to be seen. 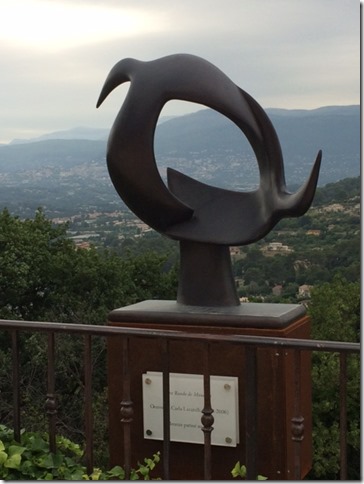 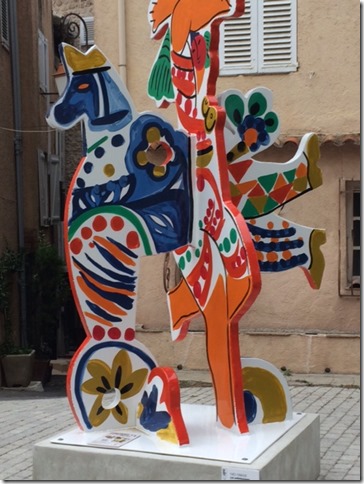 By coincidence we came upon some textile art too. We visited the Chagall museum in Nice. Apart from paintings and stained glass Chagall also designed tapestries, something I did not know. Some tapestries were very large. The exhibition often showed the small painting and the large tapestry side by side. The weaver was a very skilled woman, as the details he painted are perfectly matched in the tapestries. 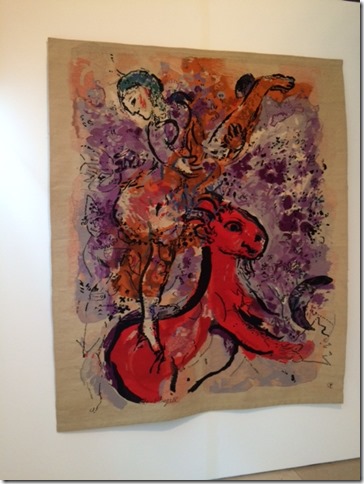 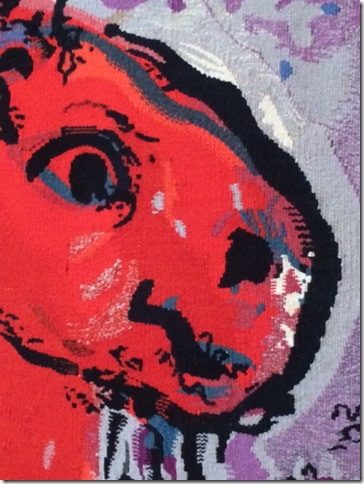 We also made a few lovely walks and are in short enjoying our holidays. In the evenings I’m knitting a shawl. This is clue 1 of a MKAL (Mystery Knit Along) almost finished. I’ve been knitting quite a lot of shawls in the past year and a half or so. After about 20 years I resumed knitting and discovered I like knitting shawls, which have the great advantage that fit is not an issue (a nice break from my fitting troubles in sewing). I’ve done a few mystery knits, this is my 3rd. It’s quite a complicated pattern with a lot of switched stitches. Fun!

Yesterday evening was the perfect moment to sew the muslin with the two different sleeves. Some important football (soccer) match that my family really wanted to see and I am not interested at all. Football on television is out of the room for me ;). I don’t mind others watching, just don’t like it myself.

The result (changed the colors a bit to show the seams better). On my left arm is the more conventional draft, on the right side Suzy Furrer’s ddraft. 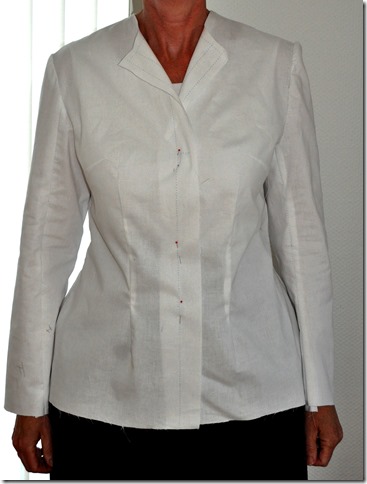 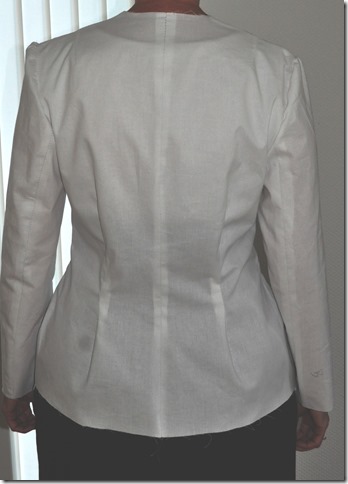 The right shoulder is more sloped which is clear in the pictutres and the sleeve even seems to drop off the shoudler. I’ll look into those issues later, the focus for now was on the sleeves. I think the shape of both sleeves is fine. The sleevecap on the more conventional one is higher (it has more ease). In both sleeves a little room can be taken out of the back armhole

In Suzy Furrer’s method the seam in the front is very visible as was to be expected seeing the pattern pieces. I don’t like that and will use the other sleeve. Though if you have Suzy’s class on sleeves, you’d probably be able to figure out how to change it. I will not bother because I have another option already.

Further this is not the jacket style I have in mind, so there will be more to do on that, but it will have to wait a while. The next pictures will probably be from a sunny spot in the south of Europe. Books and knitting in my suitcase, no sewing. 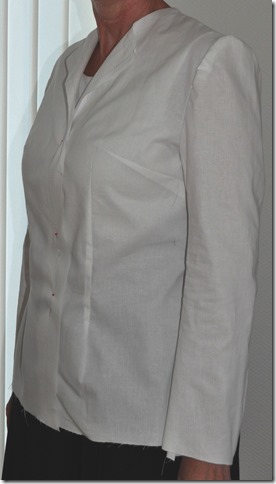 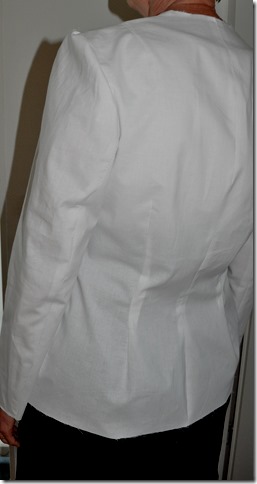 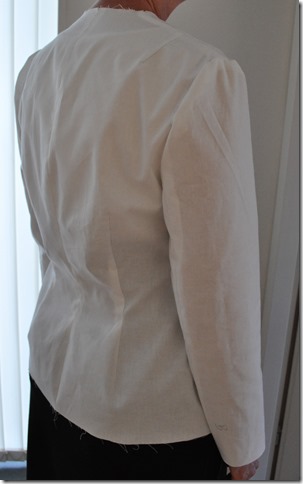 In general I’m very impressed with the pattern drafting classes by Suzy Furrer, as you have read in previous posts. Watching her doing the two piece sleeve though I had my doubts. It looked so different from what I’m used to in a two piece sleeve, both from commercial patterns as from the way I’ve drafted those before.

After my holiday I want to make a jacket, so I started changing the sloper to a jacket sloper and thought it was time for a sleeve draft experiment. I drafted the two piece sleeve using Suzy Furrer’s instructions and drafted it too using the method I was already familiar with. For both I used the same draft for the jacket itself.

Writing this post as much for those interested in drafting as for keeping track of what I’m doing myself.

The first picture is the way Suzy Furrer starts her two piece sleeve, her base is the normal sleeve draft and you take the outside parts and combine those to the under sleeve. The second picture is the Danckaerts method I’ve learned in the past year or so. In this system you don’t start with the base of another sleeve, the instructions are especially for drafting a two piece sleeve, based on the circumference of the armhole. 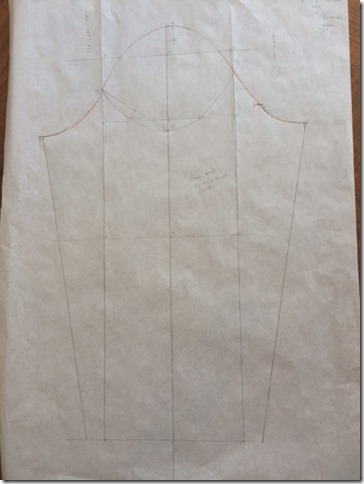 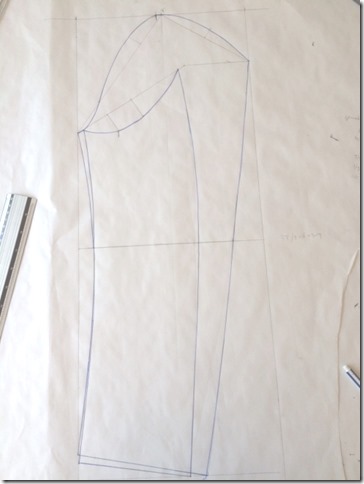 What I noticed in Suzy Furrer’s method is that there is less curve to the sleeve. She instructs you how to make it curve more forward, but in the result it’s less than in the other method. Also, because the “square” used in her method was rather wide for my armhole circumference, the result is an upper sleeve that’s very wide at the bottom, and an under sleeve that’s very narrow.

There is one important difference between the drafting systems: in Suzy Furrer’s method you decide yourself how much ease you want in the sleeve cap, as you measure the front and back length including the ease while drafting. The Danckaerts method is designed to always have 4 cm of ease. In the instructions it says: the sleeve cap must always have 4 cm of ease. Opinions differ on the need of ease at all and to how much is needed depending on the fabric you use. To me 4 cm is too much in general, I prefer less, so it will be a bit more complicated to change that in the pattern.

To me the draft of the under sleeve looks too narrow in Suzy Furrer’s method. To really compare I will make up a muslin of the jacket sloper and use both drafts.

While the weather here in The Netherlands gives the impression we are in another season with lots of wind and rain I finished a sleeveless summer blouse. This is actually my 5th iteration of this style. I have a white linen version, a white embroidered one, a bright colored one, a silk multi colored version and now this navy blue/off white silk. 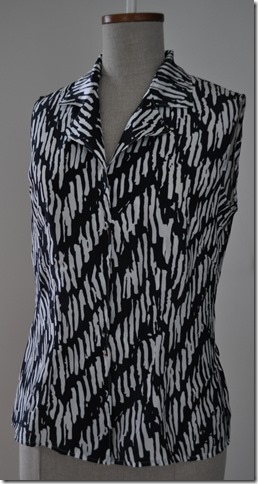 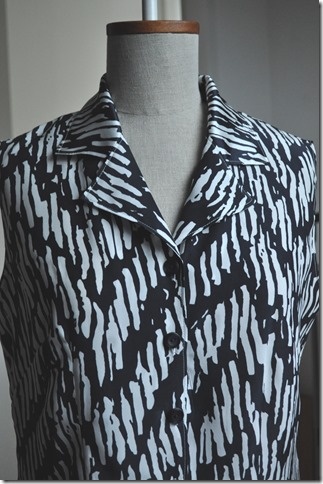 This is a combination of a magazine pattern and sloper. I used my sloper, manipulated the shoulder and armhole dart into the bust dart, and then changed the bust dart to a French dart. That’s all I did to the basic draft. Then I took the Ottobre pattern and used the pattern for the collar. The shape of the collar is close to the shape of a lapel collar. I only had to shorten the length of the Ottobre collar. I had to do the pattern draft again because though I’m sure I have the old pattern somewhere, I could not find it when I needed it. It was easier to make the pattern again than keep trying to find it.

A detail of the side where you see the French dart. 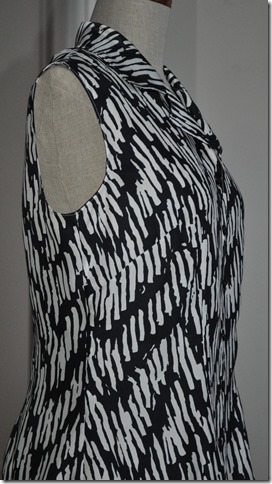 Sewing this is easy, it’s not a jacket so you sew the collar, sandwich it between front and facing and stitch it. I cut the under collar on the bias and made it a bit smaller than the upper collar to get a smooth collar that has a nice fold over the roll line. The fabric is slippery and frays easily too. Therefor I starched it a lot (with a spray starch) before cutting it, using the experience I had with my previous silk blouse. It helped so much to sew it, the layers did not shift any more and the fraying was minimal. Important too because I used French seams, you don’t want the threads coming out of those seams.

I’m quite sure I’ll get a lot of wear out of this blouse, as I have had from the others too. It’s also so easy to combine with a cardigan on a cooler day.

Isn’t it nice how some fabrics can be a souvenir with memories of where you bought it. The blue/white silk of this new version I bought recently at the fabric market in Utrecht at a meetup with sewing friends (and a special friend from Canada too!) The multicolored version on the left below is a Paris souvenir from the trip there last year, the one on the right was bought with a sewing friend at the fabric market in Goes here in The Netherlands. All fond memories. 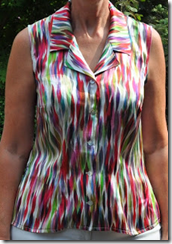 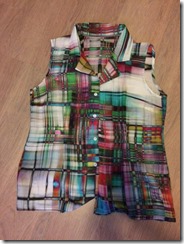