Black and white are my colors

It’s not often that I’m really, really happy with something I made. Usually I do find something not to be 100 percent pleased with, even if I don’t mention it when publishing about it. This time I’m very pleased with the result. Again it’s the black and white theme. How much I try, I always come back to black and white, with some grey and red added to the favorite colors. When fabric shopping with friends it’s obvious, they will see a fabric and say “that’s Sigrid fabric”. I made the base of the dress in the sewing weeking early November and I only had to make the facings and lining. That took me 3 weeks….

Excuse the bad hairday, but here are the pictures of a very comfortable dress.

The dress is made from a remnant piece bought at Jersey fashion. That’s where I bought the fabric from the skirt in the previous post too. Very nice quality, stable but also with stretch. I lined it with a stretch lining and did not use a zipper. The black strips are not made with regular piping. These are made with strips of black jersey, cut at an exact width, folded and sewn between the seams. Those seams were all cut with 1 cm seam allowance to make the strips peak out at the same width.

You might remember the pattern from earlier this year. The dress I made for the knock off contest on Pattern review. I drafted the pattern myself. The only change I made was lowering the neckline a bit. And no sleeves obviously, there was not enough fabric for those.

A picture of the dress with the Vogue jacket. Too dark to see the details. November certainly is not a good period for taking good photos.

This will be my last post in a while. Work is very busy so  there’s not a lot of time for sewing or blogging, as you may have noticed in the past months. Also important is that we sold our house  and will have to move out in January. Which is good but also very time consuming.  We’re still house hunting.

Hope to post again at some point in 2016. Have a good festive season and see you next year.

I bought the Vogue 1440 pattern mainly for the blouse. I was intrigued by the style and even made it, though it never made it to the blog. Kay (the sewing lawyer) wrote about it and I have the same feelings on the shirt pattern as she has. 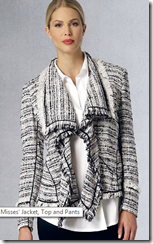 I never thought about making the jacket initially, as it’s construction with piping, trim on both sides and fringes didn’t appeal to me. Too much hassle for a jacket I was not sure I would like on myself.

Two weeks ago I was on my annual sewing weekend with 9 sewing friends again, and this time I really wanted to make something not too complicated and have something to show for it after the (long) weekend, that is: have some finished garments. I did succeed, made a skirt and the Vogue jacket and the outer shell of a dress.

The jacket was brought to my attention a little before the event and I considered making it in a black felted wool in my stash. And doing it like this made it soooo easy. Finished in only a couple of hours, from cutting to final product: no lining, no finishingn of seams. I did tissue-fit the pattern, something I normally never do but with so many sewing friends around that was doable. The shoulders were too wide and I changed those, but otherwise it’s straight from the envelope.

A lightened photo of the back. 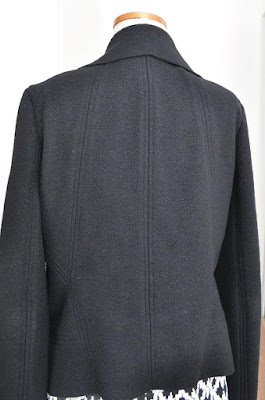 Inside, I used a hook for closing at the front. 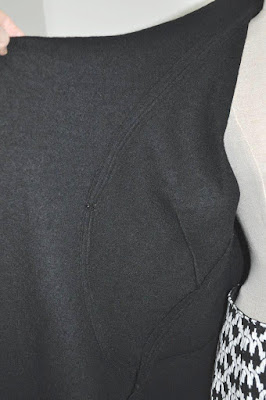 And the skirt. The ensemble is already a favorite. 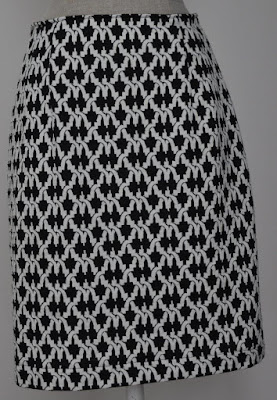 To my sewing buddies: thank you for a lovely, lovely weekend. It was so inspiring again!