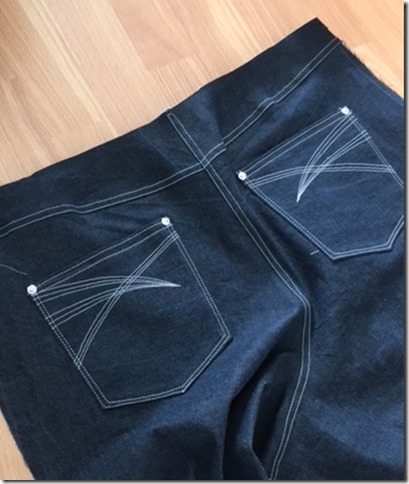 It’s been many years since I made a pair of jeans. Six years actually! I don’t know why it took me so long. The jeans I made back then still fit me though they are only worn around the house nowadays. They have seen better days. I found a nice piece of denim that I bought quite a while ago too. The price tag said it cost me 11.50 euro. Realising that the pattern was there ready to sew and all notions needed were around I started on Friday evening and I can happily say it’s as good as finished now.
No project without a hiccup somewhere and this time the pockets had to be re-done. In a “it will work out” mood I thought I could topstitch the upper hem of the pocket without interfacing it, using a walking foot. I used water soluble stabilizer on part of the pocket, but not in the hem. WRONG idea. It stretched!!! Horrible, so I did the pockets again. Lesson learned.
A picture to show the difference. 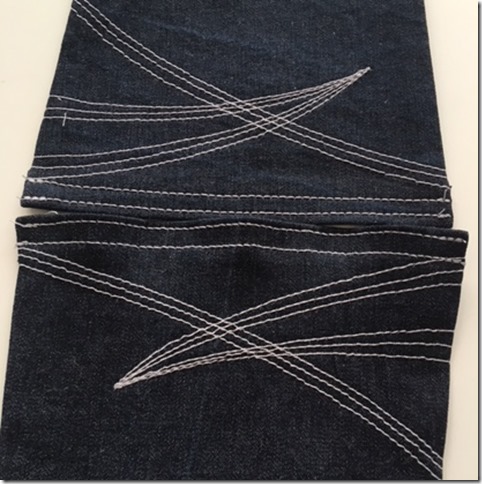 I’ve been in doubt about writing about my knitting projects as my blog has always been about sewing and only very occasionally I mention other subjects. But well, as it is my blog I’d like to share my knitting projects too and if knitting is not what you like to read about, this post is not for you.

I learned knitting as a child, did a lot of knitting in the 80’s and knitted nothing for about 20 years after my children were born. I wanted to knit for them, but when a sweater was already almost too small when I finished it, I stopped doing it completely as there simply was not enough time to do all I wanted to do with young children around.

Fast forward to about 4 or 5 years ago. At the time I was offered a free Craftsy class as a birthday present (they only did it that one time), but it had to be a knitting class. I took a class on lace knitting and I liked it that much, that knitting was part of what I did again. Mostly shawl knitting. I liked the techniques, the more complicated the better. Is there a relation to my sewing?? And shawls had the great advantage that size/gauge/tension didn’t matter. It takes more time to knit a garment than to sew one and I was so afraid that after hours and hours of work, a sweater wouldn’t fit.

But…. after I knitted quite a few shawls the thought came up: how many do you need? So at some point I dived into knitting sweaters again. I haven’t done many yet but like the top-down method where you can fit as you go.

Currently I’m knitting Sweatrrr. The technique is top-down, with knitting the top of the sleeves at the same time too. It’s called the Ziggurat method. When I found this technique, I had to try it and even though this is my first sweater in this technique, I’m already so convinced that I bought the recently published book too. (disclaimer: I have no affiliation to the designer, have bought my own copy of the book, I’m just very happy with the result)

I wouldn’t be me if I would not change something, so instead of the squares in the front and back, I added a Japanese stitch pattern center front. The back is plain stocking stitch. 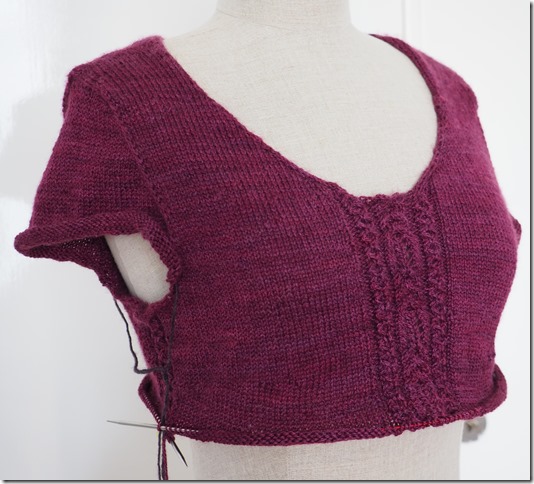 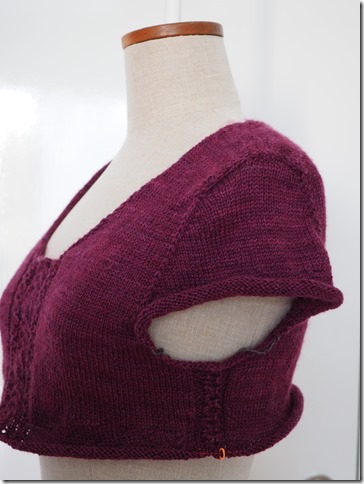 Can you believe that the top of this sleeve was knitted at the same time as the top of the body? Fascinating isn’t it? There’s still a little jog but that’s my fault, knitting this way for the first time.

It will take more time than the average sewing project, but I’ll show you the result at some point.

A muslin in silk

Well, not a true muslin of course, I definitely hoped this would result in a wearable garment and decided to use this silk that’s cheaper than the linen I planned to use for this shirt. Still wanting to do that, but didn’t want to take a risk with that specific fabric.

I think this is quite a good fit on me. I did not change the length of the body, nor of the sleeves. I did measue the sleeves, as in most companies they are too short for me. Not necessary here, which means that if you’re shorter (my length is 1.74 and my arms are a bit longer than average) you even might want to shorten them. 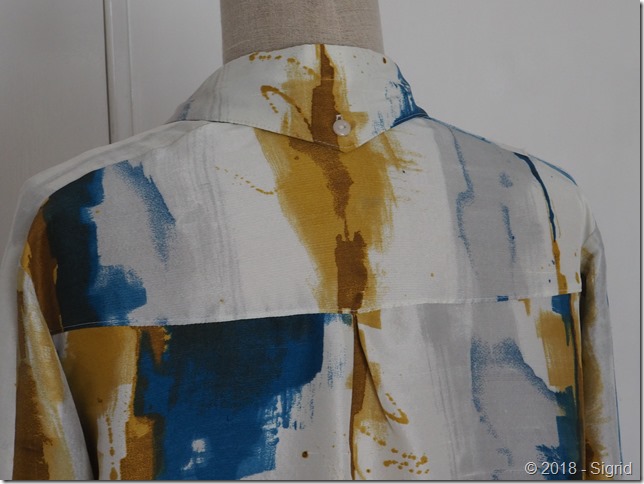 Not my usual colour scheme, but definitely a “me” print. 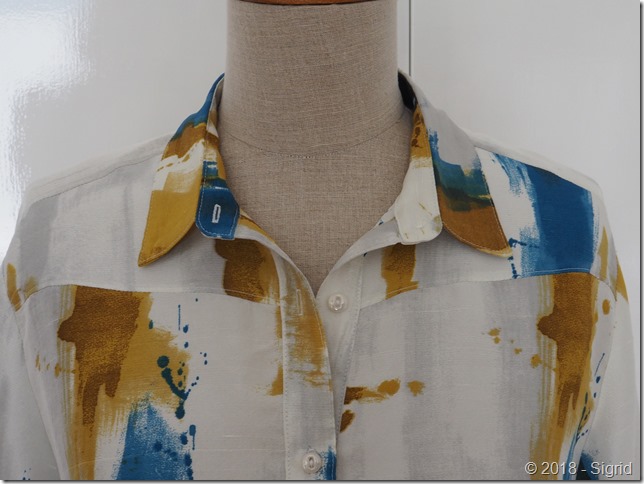 The slit is a bit long. I’ll make it shorter next time 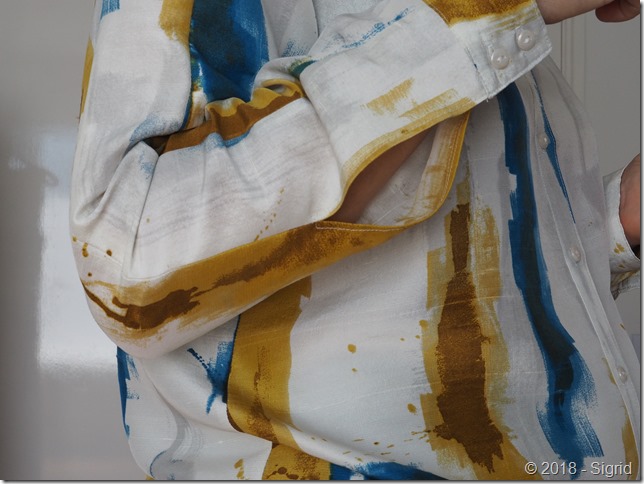 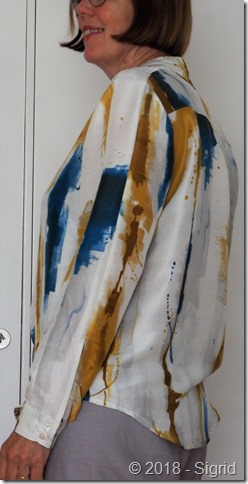 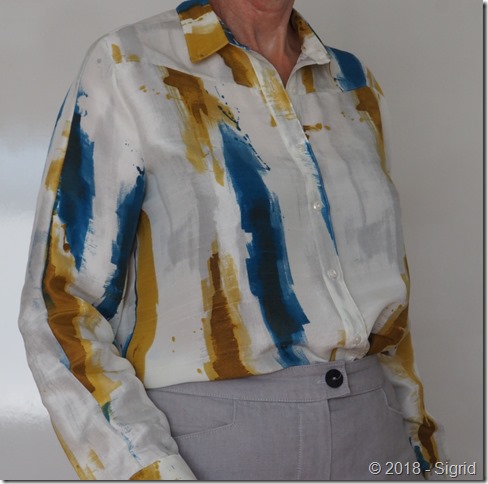 I could have added a bit more to the hip area and will in my next version. I used a size smaller than I should have used based on the size chart and am quite happy with the fit. As said in my previous post, there’s no waist/hip shaping which for the blouse might be an issue for more women with a pear shaped figure.

As to the instructions: I’m not a good judge of those, as I’m too experienced to really need them. But in one illustration a pattern piece was very different from the actual pattern piece and I thought that very confusing. There’s also quite a bit of information in the instructions that imho belong to your basic sewing knowledge or can be looked up in a general reference book or online (what is basting, what is clipping, that sort of instructions).

All in all I quite like the pattern and will sew it again when this heatwave is over. It’s just too hot to do much these days. Not my kind of wheather.