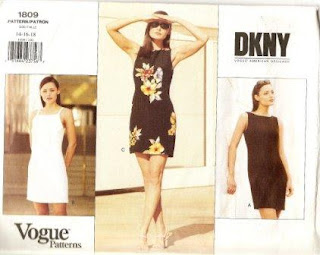 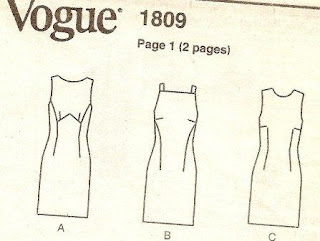 Recently I bought 2 vintage patterns on E-bay. One is the Ralph Lauren top of 1986 that I just completed. The other the Anne Klein dress from the nineties above that will be one of my next projects (view A).

I never bought a vintage pattern before (and the 80’s don’t sound very vintage to me, when do you call a pattern vintage?), but this top appealed to me because it reminded me of the Burda top with similar shoulders that I made a few weeks ago.

ome time ago my mother found an envelope with an old pattern in it that was mine. I had lent it to her (must be over 20 years ago) and now I have it back. I had totally forgotten about this pattern and having it back brought back a lot of memories (not only those that I share below). 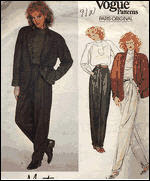 The pattern in the envelope was the pants part of Vogue Claude Montana combination of blouse, jacket and pants. I was a great admirer of this designer in those days and I think this was the first Vogue pattern I ever bought. As a student then with no money to speak of a Vogue pattern was very, very expensive for me. It was the only foreign pattern label that could be bought in the (no internet! How could we do without) . I think that I never heard of the other three of the “big four” then.

And I remember too that I was amazed by the detailed descriptions and step by step pictures of the construction. That I had never seen and I learned so much from it, used as I was to Burda or Knip instructions. I saved money to buy one or two other Vogue patterns (one of them another Claude Montana that I still have), and it brought my sewing to a higher, more ambitious plan.

Another memory is the light yellow fabric that I used for the pants, and a special shade of green fabric like silk (certainly not the real thing) for the blouse and the special button that closed the collar. I don’t remember making the jacket. Now I will remake the pants one day.

But the envelope contained only the pants pattern and both my mother and I don’t know where the remaining parts are. We both moved house several times since then, so maybe it got lost forever.

So I looked at e-bay for this specific Vogue pattern, as I would dearly like to make the blouse once more too. And there the pattern was, but alas, in a size
10. No good for me.

But searching, I found these other patterns. And I'm glad I did.