It's been a long time since I sewed some lingerie. Too many other projects that took priority, but today I felt like making one.

This is the result, a partial band bra. I took pictures while constructing, and will make a tutorial soon. Some time ago I received an email asking for a way to make a front closing to a bra. I did reply that I had never made such a bra (though I'm one of those women closing my bra in front and then turning it to the back). I think that this is the type of bra that might be the solution to make a front closing. I wouldn't know how to do it on a full band bra.

But now (it's Sunday evening here) it's time to prepare for a working week. 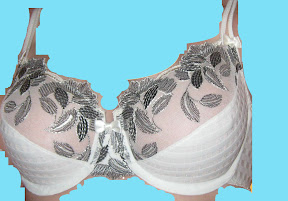