Sunday morning was spent on changing the pattern for the Vogue jacket, and Sunday evening I spent about an hour making the second muslin. This is the result, I'm quite satisfied. It's worth the extra muslin.

What I did was: 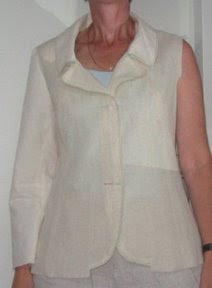 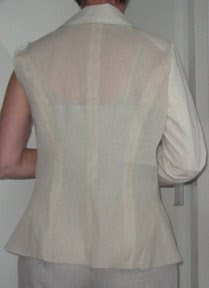 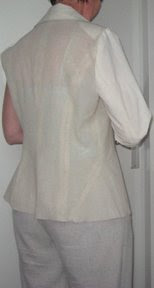 Sorry about the front picture, the neckline is a bit uneven, but these were made with a selftimer.

The waist can not be too explicit, because then my hips have too much accent to my liking, so there is quite a bit of space in the waist area, but the lines are better now.
The only thing to change now (I think) is to make the hip a bit less wide on the side panel, but that's quickly changed on the pattern.

On the sleeve I made a mistake, and took a line for the hem line, but it wasn't. Now it looks too short, but actually I must take out the extra length I added in the pattern.

The collar has separate pattern parts for under and upper collar, and there's also an extra collar band. That promises to be a smooth laying collar.