Copying a pair of pants

As I showed in one of my last posts, I was intrigued by a pair of Marfy pants as shown in the last Threads issue. And in the past few days, I took some time to try to get the basic pattern and made a muslin.

I took my last BWOF pattern as starting point. These are a basic pair of pants with shaped waistband that I love to wear and fit is not the main issue now. Therefor no pictures on me. After drafting the pattern (see below) this is the result. At center front there's more a corner than a straight line, which is easy to change. As you can see the pocket is not drafted as the original drawing, in which it extends to the center front seam. It would have been too much for my figure. 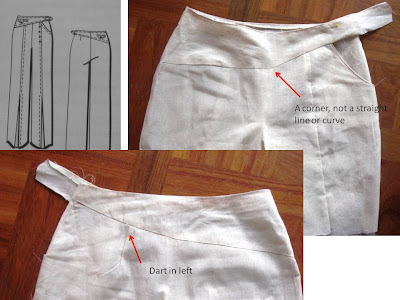 I've been thinking some time on the closure for these pants. First I thought to make an invisible zipper in the side, but that's not really a good option in these pants. Based on something I've seen in Sandra Betzina's book I try to make an opening by not closing the pocket all the way up. I'll have to leave it open 2 cm more, as it's a bit difficult to get into the pants now. Further I'll have to make the pocket pattern a bit wider, so that it extends more to the center. The picture below shows the outside on the left, and the inside on the right. 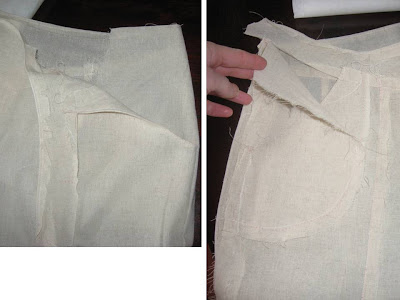 This is how I made the pattern. The dark lines are the original lines of the pattern, with the band attached to the front and back pattern. The red lines (indicated with scissors too) are the lines that I made for the design. The small green arrows indicate where I closed the dart. On the right back pattern I moved the very small dart that was left to the center, on the left back it remained, as in the original drawing too. 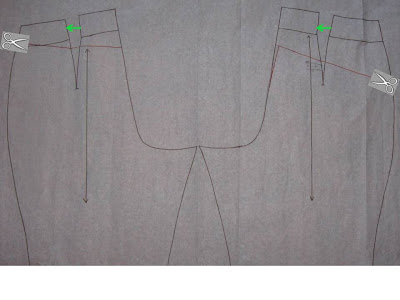 The same idea is in the front pattern. The dart of the right front was transferred to the seam line that is made at the center front of each leg. 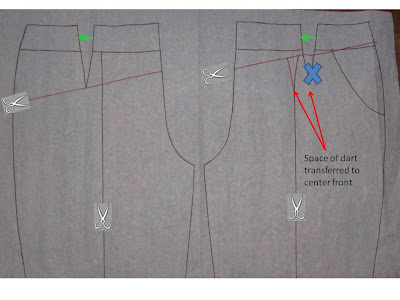 On the back there is a welt pocket with flap, which I never made before. Last week I received the book Cool couture by Kenneth King (thanks Elaray for the heads up on this book, it's very inspirational), and this technique is described.  Last year I did an online class from Kenneth King, and was impressed by the way he explains things, which makes me confident that the instruction in his book will work out well.

I really have been buying some books lately, I'm eagerly awaiting the book The fashion designers directory of shape and style, on which Lindsay T wrote a post. In the past two months I've bought Jackets for real people by Pati Palmer, and Easy guide to sewing linings by Conny Long. Don't exactly remember what post or review brought me to buying these, but I'm happy with each book, as it's always good to be able to read different methods, or a different way of explaining the same thing. Till now I've always found something new.

This will be a "slow sewing" project, taking my time to explore the new technique and I also want to line the pants, which is also something that needs careful planning. Tomorrow the normal routine will be back, after two irregular weeks, which for me means less time for sewing too, and work will take (a lot) more of my time.