I received my issue yesterday and if I would have had the time, I would have traced a few patterns already. But it'll have to wait.

A couple of jackets

No. 113 is for petites, so perhaps I'll have to find out how to "de-petite" the pattern. It's designed for women of 1.60 mtr, and I even have to make the default BWOF patterns a bit longer in the waist, as I'm 6 cm longer than their default length size to which they draft their patterns. A bit complicated.

I definitely like the style of no. 115, certainly if you see the picture in linen in the magazine, but for this one I'm unsure whether it suits my figure. A muslin should make that clear. 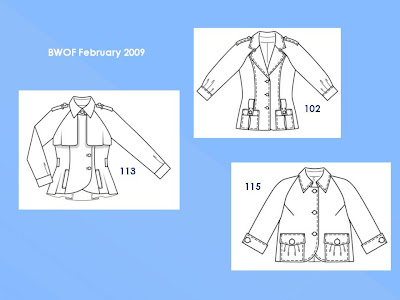 The first pattern that I'll trace is the blouse 104. I like the collar and it's a great basic style. High on the "to sew list"

For summer I'd like to try 129, the exclusive design of this issue. It's so special but can still be worn on a pair of jeans for a more casual look, or with a skirt or more formal pants for a more festive appearance. Summer is a long way off though, so priority is not high. 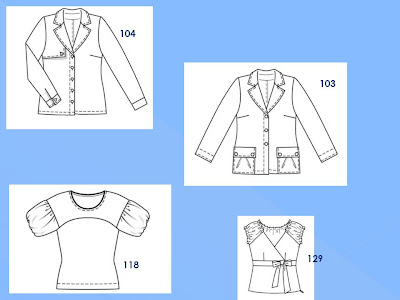 All patterns with pictures on models can be seen here (the bwof site).

Not Febrary but the January issue

On special request from Nancy K, the picture and line drawing of the blouse I'm making of the striped fabric. The Bwof site was not showing any pictures last weekend, I had intended to add this in my last post. 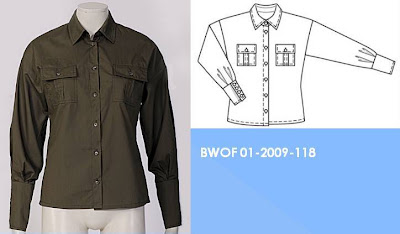 Nancy (and all others interested in the collar construction): I did look into the online index for Threads and tried to find this method, but there was no article on collars that I could find that by the description of the article is the method that is shown on the dvd. But it's difficult searching in this index, and I don't have that many old issues myself.

LisaB mentioned in the comments that this method is described on the site "Nancy's notions". I followed here description how to get there and here is a direct link to the instruction. Thanks Lisa.

I liked the Threads dvd, it's with live videos with Louise Cutting and Judith Neukam (Threads editor I believe). The last plays the role of not being too experienced herself, and Louise explaining everything in detail and repeating if asked. I think it's an interesting dvd, but personally I would have liked a book, as I can lay that beside my sewing machine, take up when needed, and use as bed time reading. But I did learn a few new things from this one.