Below a little detail of the second set. If you click on it and browse further there are a few more details. A picture on my dressform is the best I could do.

I had wanted little red bows as embellishment, but they were not available at the moment, so I decided to finish with black bows.

In the comments I was asked where I did learn to sew ling.erie. I did take a few courses and workshops and learned most of it there. Later I started sewing a couple of commercial available patterns and as with other patterns too, I learned from the instructions in these patterns too. And as I've said before (but not all of you will have read my posts on this), sewing this is not as difficult as it perhaps seems. You have to be accurate, and you need a lot of different notions, but sewing is not that difficult.

Fitting is another matter, don't be disappointed if your first bra doesn't have the perfect fit. The problem is that you can only try on a bra when it's nearly finished. And I assure you, my first bra's weren't perfect either. But I'm glad I persisted and can wear this more luxury style in different variations and not too expensive. 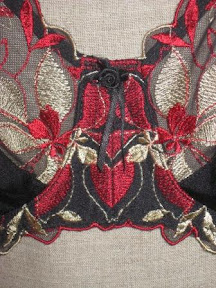 Some background to my history: when I started buying bra's myself there hardly was any choice (D75 in European size). Having a D-cup at the time (late 70's) was having a choice in white or flesh color, with very wide straps in a style you don't want to wear when you're 18. There wasn't anything nice in a "normal" store (at least in my memory), and the possibility to go a specialized store was something I wasn't aware of for some time.

When I first got to such a specialized store a new world opened for me, there really was something else. I remember vividly the French Lou, and American Warner being the two companies that had bra's that fit me. I got addicted to these and even remember going to stores in France when on holiday there. But as a student I could never afford to buy a lot and wore them till the very end. Just too expensive and I remember friends who couldn't understand the amount of money I paid for a good bra. And later, when money wasn't that short any more, I kept to those brands for most of the time.

Fast forward to about 2001-02, when I learned to make my own sets. Since then I made a lot of sets for myself, and last year some for my daughter. It's fun to do, but as with other garments too: it's difficult to buy something RTW now I know how to make them.
But I'm very happy for DD that she has ample choice in the shops (and not a difficult size). A lot has changed.