Yesterday I received Threads magazine no. 141, which is quite early, as I received no. 140 only two weaks ago. From the website I read that this issue will be available in the US in January. Strange, but I'm not complaining.

I like this magazine and was very much inspired by the white blouse variations shown in the previous issue, and there are two more inspiring in this issue too.

There is no magazine here in the Netherlands with this kind of information. This morning I took some time browsing and reading. I like articles about the making of dressforms, or the two sided coat, though I won't ever make one I guess, enough trouble getting a one sided coat done I think ;) .

This is a pants pattern that was made in the "Pattern review" section of the magazine: 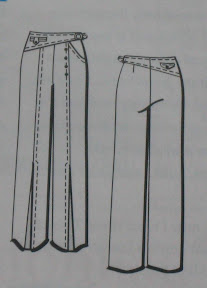 A Marfy pattern that is only available through the Marfy website on request, not shown on their site anywhere. I did some internet searching, but couldn't find more information. It doesn't help that the Marfy site doesn't have a search system.

As I won't fit in any pants pattern without serious alterations, it's no use ordering this pattern anyway. It might be a project for one of my next pair of pants. I'm intrigued by the waistband and the pocket details in it. I would omit the slit in the front and probably the buttons on the left leg. I guess it would be fine to make it with a invisible zipper in the side. Something to think about.

There is one article which I'm curious about. It's called The Golden Rule of Proportions. I'm familiar with the "golden ratio" concept, and how it's used in art. But in garment making? The Fibonacci series (a mathematical series of numbers) as a starting point for designs????

Tell me, is there anyone among you who uses a "calipher" or a "phi ruler" in your sewing adventures? I didn't know the existence of these tools, and don't feel a need to have them.

In the article itself I don't read any new things, "look at a skirt's width in proportion to its length", "Compare style features adjacent to each other, such as the size of embellishments next to one another". Ok, not all articles can have everyones interest, but this one highly surprised me.