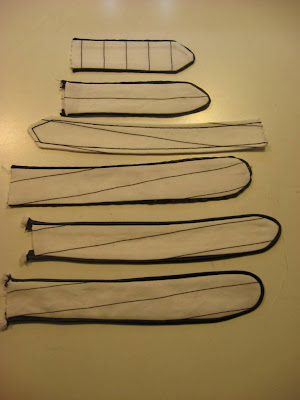 It took me some samples on the piping before I had the courage to decide I would make my Vogue 1066 pants with piping. I had two sorts of piping. One a thinner piping, with no separate cord in the middle. The other the more classic bias piping with cord.

The thinner variety was difficult to work with, certainly for me as I do not have experience with piping. I also tried how it would be if I only used topstitching (3rd from above). Didn't like that with the stripes in this case.

Another difficulty for me were the points of the tabs. The pattern shows them as sharp angles, but I couldn't make them work properly. Which made me finally think that I had better make them round. At least easier and with the bias tape with cord it was relatively easy from there.

A picture from the front pinned on my dressform. Hope to finish them this weekend, it's pretty straightforward from now on, I already inserted the zipper. 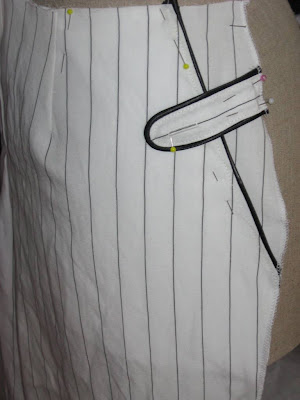