Linen is beautiful, but...

it's wrinkling. As you can see in the pictures and I only ironed it shortly before putting it on for pictures. Should do it again, but not now, so apologies for the wrinkles. After a lovely week in England (in which I met Melissa from Fehr trade, which was so nice, thanks Melissa), this was the first thing on my sewing to-do list. It was not finished the week before our holiday. 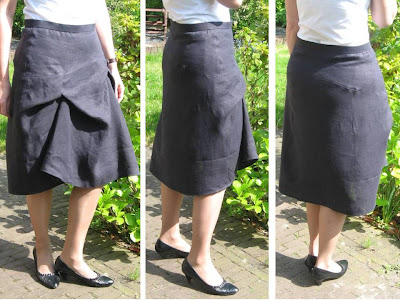 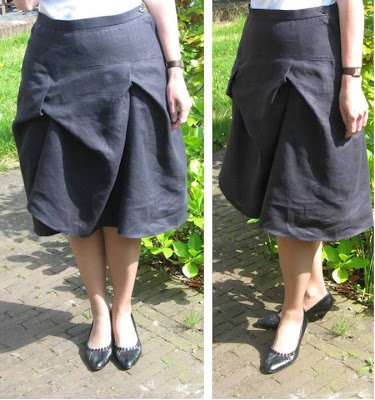 I like the result, when I put it on for fitting, my son came in and said "great skirt mom", which is a great compliment from a 13 year old boy.

It's not the best thing I've made, the waistband could be a bit better shaped. Not too bad, I'll wear a shirt over it most probably, but I skipped the shaped waistband and made a straight one. Shouldn't have done that, shaped waistbands are much better on me.

The design lines in the back are not clearly to be seen, but I think the vertical lines are not really necessary in this style. The emphasis is on the front, and as you can see in the picture of the back, the right side is pulled to the front, because of the way the pleats are made. Only a minor detail. I think I'll wear this skirt quite a few times this summer.