A new set does the trick

The week ends (or starts) with a positive note. I’ve sewn something that I love, that is quick, isn’t it? A new lingerie set in 1.5 evening. It fits, I’m very satisfied with the result.  It doesn’t bring me closer to what garment I want to sew next (still feeling undecisive about that, I will take my time), but it’s nice to have sewn this. I can’t imagine myself not sewing, but the results of the past months (I even remembered two other projects that were no success) were not encouraging. This cleanses the palette and will hopefully be the first of more positive experiences in sewing again. 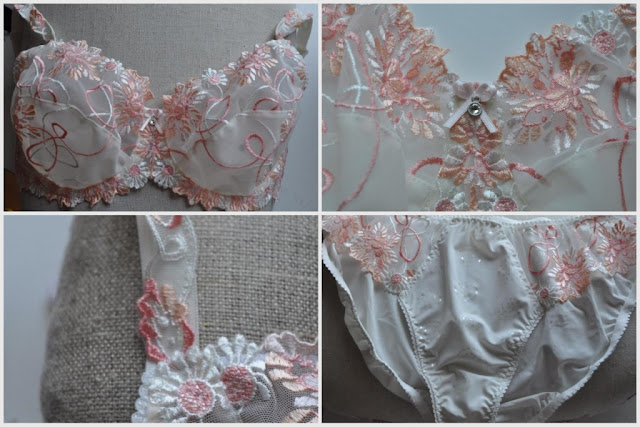 For those of you interested in some more details the following pictures.

The bridge has a seam center front, as to make it possible to have the scalloped edge of the lace on the bottom. 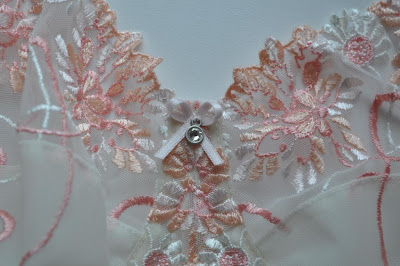 The scallop of the lace looks to be round here, but it has a seam at the bottom of the cup, which is far from obvious. How I do the elastic on the inside of such a scallop edge I have described in this post.

The inside. The sidepanel, bottom and side cup have a non-elastic layer to stabilize. This is also transparent and exactly the same color as the base fabric of the lace, so you can hardly see it in the pictures. I keep my seam allowances in the cup a bit wider than usual. If it is trimmed very short, the embroidery will come loose easily (how I know??) 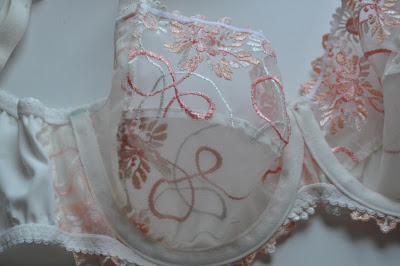 My bridge has to be very narrow. This is how I overlap the chanelling for the wires. The wires go up till the top, but the second row of topstitching ends lower, where the two channels meet. 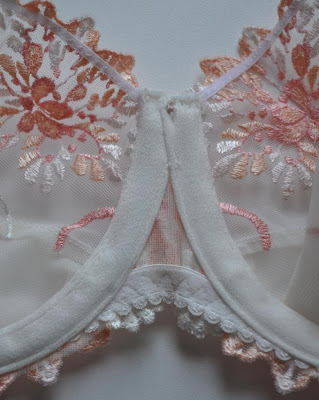 The “downward hike” as described by Beverly Johnson is my default back now. 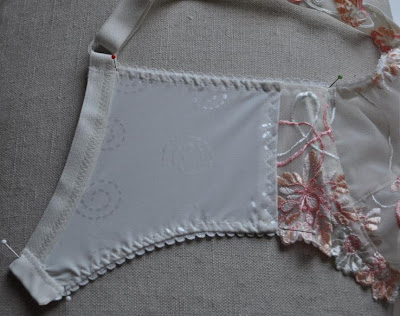