This jacket is not a quick project by any means. It has a lot of technical details that I don’t do often: welt pockets (with flaps!), bound buttonholes, special rounded band on the edges. On the other hand a jacket is never a quick project.

After spending a lot of time cutting, I interfaced all pattern pieces with fusible interfacing (pro weft fustible interfacing from Sew exciting). The fabric alone was difficult to keep straight while cutting and not stable enough in my opinion. This just gave it the little extra it needed.

From that point I used the pattern pieces as if they were fabric only, and interfaced the front completely with a bit more sturdy interfacing and made a shoulder stay. I’ll be making the inside of the jacket in the same way as the jacket I made in May. You can find the pictures here.

After interfacing and careful marking of the location of the pockets, the first sewing was done: the welt pockets. I made some samples with the 7/8 gros grain ribbon I bought especially for the technique described by Kenneth King. I adapted the instructions to work with the sewing foot I have (he used a quilt foot that I don’t have, but it’s only for correct positioning of the needle, it took me two samples to find out what the combination with my foot/needle should be). After making those samples the actual sewing in the jacket was not very difficult. Time consuming, precise work, but not difficult any more. I love that method. 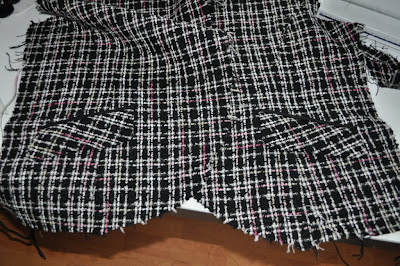 For the pocket flap I used the great instructions of Kay Y. The lining is just a bit smaller than the outer flap, which makes sure the lining doesn’t show on the outside. 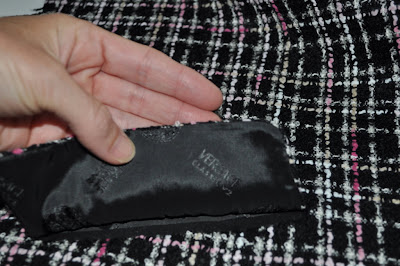 I’m still not sure about the bound buttonholes in the band. I’ve considered making a buttonholde in the seam between band and main body, but on my muslin this made the band turn upwards. If I make the buttonholes in the band, they will have to be positioned a little different, to make sure the button doe’sn’t go over the edge. I’ve still some work to do on this jacket before I have to finally decide on that.