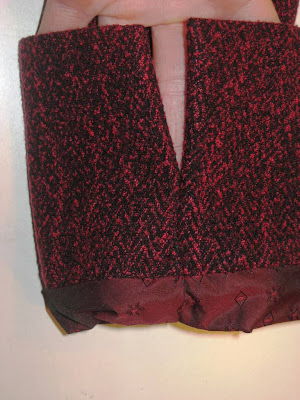 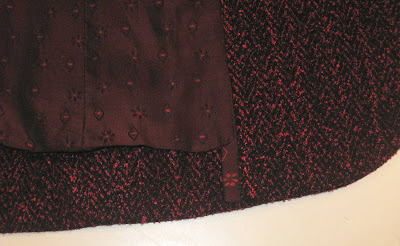 I'm certainly not planning to be a daily blogger, but I want to share this progress with you. This is my jacket of 100 errors as I refer to it. It's Vogue 1063 and I was not too happy with the first version. There were several reasons for that, but one was the lining method I used in that jacket. So I started another version, but used a combination of tailoring techniques and finishing it with a rtw lining method: bagging a lining.

As said in an earlier post, this is something I've never done before. I read about it for the first time (2 years ago) in the book Power Sewing by Sandra Betzina, which was one of the first sewing books I bought in the English language (and  still consider it as one of the best books I bought on sewing. It gave me so much inspiration for making my skills better) . After reading about several methods (Kathleen Fasanella's tutorial on the internet and the method described in "Jackets for real people"), I decided to use the method Sandra Betzina described.  The main difference (if I understood it right) with Kathleen's method is ... Here stood some text in which I was wrong, as Kathleen made clear to me. I was not aware of another method described by her and used a tutorial that was written for a very specific series of jackets that were not her design. She prefers a reference to the tutorial you can find here. But I didn't know this "nameless tutorials series" untill tonight. Sorry Kathleen.

Let me say that NancyK was right in her comment. She said: "Once you bag the lining you'll wonder what you were waiting for." And it's true, not difficult at all, and I will certainly use this method on future jackets.

There are no pictures of the construction of this jacket, and final pictures of me wearing the jacket will be made in the coming days.

Now to decide what to sew next. So many ideas, and just don't know what to start with.