Browsing BurdaStyle online I saw a skirt pattern I liked very much, but from an old issue that I don’t have. I tried to buy the pdf pattern but their system blocked (tried it twice, called my bank and they saw I tried to pay it and assured there was nothing wrong at their end). Then a sewing friend came to the rescue who has this issue and traced it for me (Viv, again a huge thank you!). 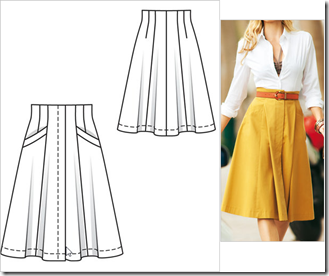 It was not in my set of patterns I cut in a batch a few weeks ago, almost finished those and update on those items soon. With warmer weather finally arrived here I just had to make this skirt, sewed on the buttons last night and am actually wearing it now.

At the time I might have thought this was not a skirt that was very current, at least I don’t remember seeing wide skirts for a while. They definitely are around again and this is a great pattern. Burda often is fashion forward!

The pocket is very easy, no need for a single welt construction here. It’s between two seams so you just sew the pocket to the bottom pattern piece and lay that on top of the upper pattern piece. 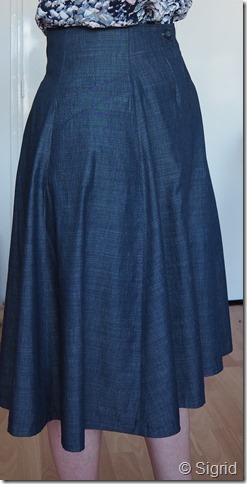 Fabric is a bit prone to wrinkling. I already sat down in this skirt, which is visible in the back picture.

I’ve not subscribed to Burda for a long time, but as I eventually like patterns from issues that I dismissed before, having used quite a few patterns from more recent issues AND having seen the preview for June with some great patterns, I will subscribe again.