Once in a while a pattern shows up in a magazine that I want to make immediately. This Burda dress from the June issue is one of those. 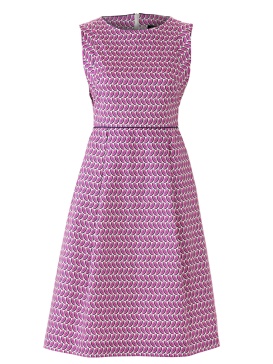 It’s mainly the linedrawing that’s interesting, as the fabric they used for the magazine issue is not really showing the design lines. There would have been better accent options for the piping they uses.
If you’re like me and in general don’t look at the Burda instructions but do it by experience or your way anyhow, DON’T go on autopilot with this one.
Sleeveless dress: I close shoulder seams at the last possible moment. Not here, as you have to sew the bias band in between the center and side parts. The band has no seam (and I wouldn’t add one, too many layers of fabric), so the shoulder has to be sewn earlier than I’m used to.
Darts: I was inclined to sew all darts as first step and realised really just in time that the front dart is taking up the edge of the band. Front and back band! I was stupified why the angle of the band was not matching the side seam, until I studied the line drawing again and realised the edge was taken up by the dart too. Which as you can see in the photo has a very special effect on the side seam. 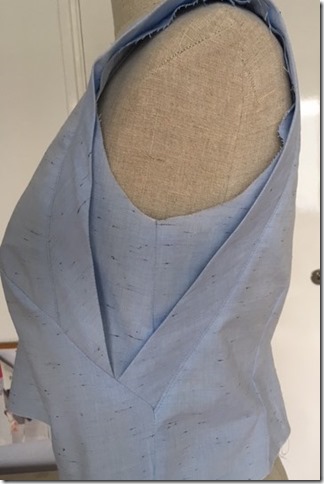 It’s a pattern that’s drafted very carefully and very beautifully. Would be awesome in a striped fabric, using stripes in different directions too. This time my advise is to use the instructions or at least think about how to construct this before starting sewing.
In my photo you can see a bit of gathering in the back. The band is cut on the bias and has to be attached stretching it to match the back pattern. It will probably help with the fit, getting it closer to the body.
Even though I love this pattern, it might be put on hold for a few weeks. My agenda is very full before we go on holiday and I don’t want to rush this.

Update July 2018: Though the fit was good, I didn't like the light blue colour as a dress on me. I dyed it but I didn't like the result. It's been tossed in the bin. Wrong choice of fabric. Maybe one day in another fabric?
op May 24, 2018