The last of the three unfinished objects is a dress I started in the last week of December. In the same spirit as the Burda challenge Marianne from Foxgloves and Thimbles started a Knip Mode challenge to sew more from her Knip mode magazines. I don’t have as many of those as I have of Burda magazines, having had a sort of love/hate relation with the magazine. I loved them around 2009/2010 when they had some really good and original designs. Since then I’ve occassionally bought the magazine as mostly their styles did not attract my attention but I must say they are improving. I must even confess that browsing through the issues I have there are quite a few patterns I want to try and I took up the challenge (again without fixed rules) and will try to sew at least 6 items from other magazines than Burda. 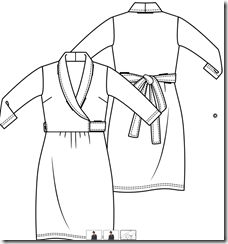 This dress is not very original, but it suited me for the fabric I had. It’s a mix-and-match pattern with several skirt and collar/neckline variations. I used a different skirt variation then the one in the line drawing.

After washing this fabric it was not as beautiful as it was on the bolt and I left it in my closet for quite a while. Rummaging through my fabrics I saw it and thought it was a shame not to use it after all. It was pretty straightforward sewing, no surprises. I used a size 38 for the back neckline and 42 at bust level. It’s easy to merge between sizes and a “fba” like this mostly works for me in a knit like this.

I did sew a zipper in the side seam, as I was afraid I could not get into the dress, the waist having no extra width. 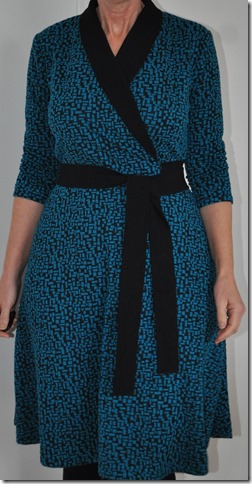 I like the top part of the dress, but not so sure on the skirt. I shortened it because the original length was way too long and made it matronly. Shorter is definitely better, but perhaps a pencil skirt style is better on me.