This is the second of my three ufo’s from last year. I showed the start and interfacing of it at the start of December. My last post on it is dated December 18 and then I said I hoped to complete it within a week, unless I would make a Christmas dress. Well, I made the Christmas dress and started other things in the meantime too. Somehow I was just not too pleased with it.

I tried it on this week and first of all cut off the extra length I had added to make a longer jacket possible. Not good on me, I like my jackets shorter, I’ve yet to find a longer style jacket that I like on me. I tried it on again and still was not satisfied with it. It felt too big, even when it was made from the same base pattern that I used for my previous jackets that I drafted myself and that fit perfectly. I realized that using a fabric with stretch would feel very different in a jacket. I’ve made ponte-knit jackets before but they behaved, especially after using interfacing on them, almost like a woven. I did not interface the body of this jacket, as I wanted a more unstructured jacket.

Of course I could not completely go back to the drawing board, as the jacket was almost completed. I took in the sleeve width and made all vertical darts deeper. In the back I sewed the darts till the hem, thus taking a bit out of the back hem width too. It is closer fitting now and looks so much better :).

My lesson learned is that if I want to make a jacket from a knitted fabric, I’d probably better start with my normal sloper, not the jacket sloper that has more ease. 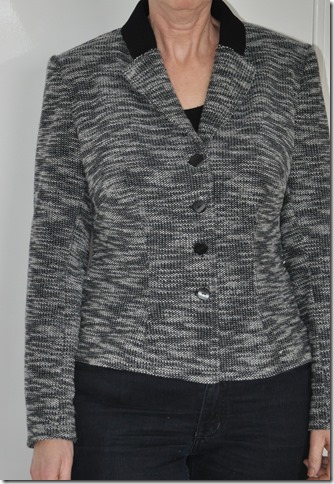 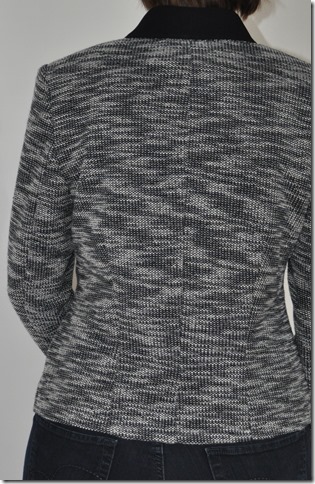 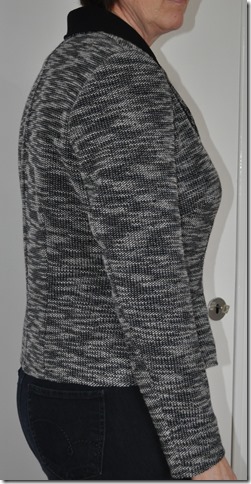 No surprises on the inside this time. I used a plain black stretch interfacing. When I put the jacket on after it was finished it felt so comfortable. It will get a lot of wear I think, it feels like a cardigan. At the same time I can see the difference interfacing the front and using a shoulder stay makes. I prefer the tailored look, but I wear those tailored jacket not that often. 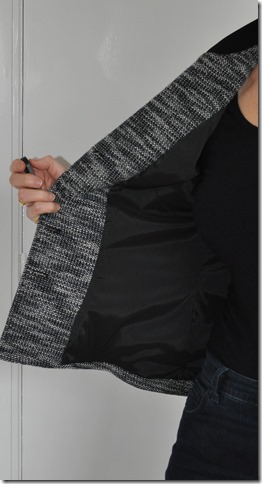 The fabric looks only black and white in the photos, but in reality it has some grey and blue threads as well, making it a bit more special. 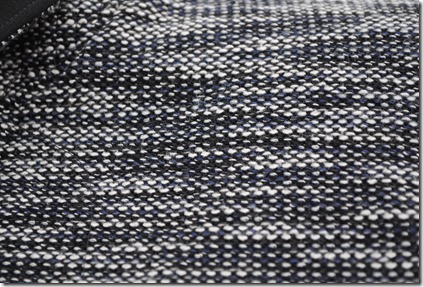 The pattern I drafted myself, copying the collar style from a rtw jacket. I used the sloper I made in the Craftsy class Pattern making basics – Bodice sloper from Suzy Furrer, with the extra width added for a jacket. As said above I think it would have been better to use the sloper without extra ease with this fabric..

For the collar I used the instructions for the notched collar from her class Collars & Closures, without making the notch.