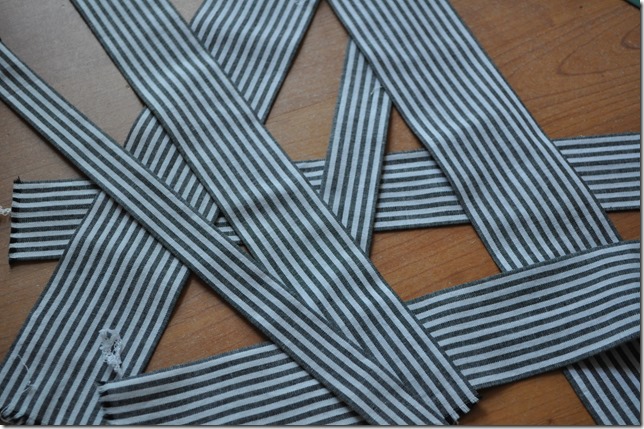 It’s getting serious. I’m working in the fashion fabric. I pinned out a little in the back, resulting in both a better fit in the back and the sleeve fitted better at the same time. I will post a picture of that last muslin phase when I have one ;).

This morning I made the final pattern based on the original pieces and the muslin. Like Holly said in her comment on my last post: it’s not a project to whip up in an afternoon. The strips for the front took me about 2 hours and I took a huge shortcut. Though it’s only a shortcut from what I originally planned, there are no instructions.

I planned to make strips in the conventional way: sew on the wrong side and turn the strip. When thinking about that I already saw a problem in pressing the seam open as I did not want the sewn side on the edge.
After cutting the strips I encountered another “problem”. I wanted all sides of the strips to have the black on the edge (ocd, I know). Difficult to get right. Change of plans then: all the strips were ironed in the way I planned and initially I thought to close them with hand sewing. WHAT??? Hand sewing all these strips? I’m not a great fan of hand sewing and avoid it if I can.

Conclusion: I did not sew them but fused them together, the sewing police may come and fine me. Serged one end and used narrow strips of vliesofix to close the seam. I used vliesofix because I had that available, it works the same as wonder tape but that is not readily available here and can only be ordered online. Vliesofix is sold by lengths and it’s easy to cut narrow strips with a rotary cutter. I’ve used it before to cover padding with the right color lycra. 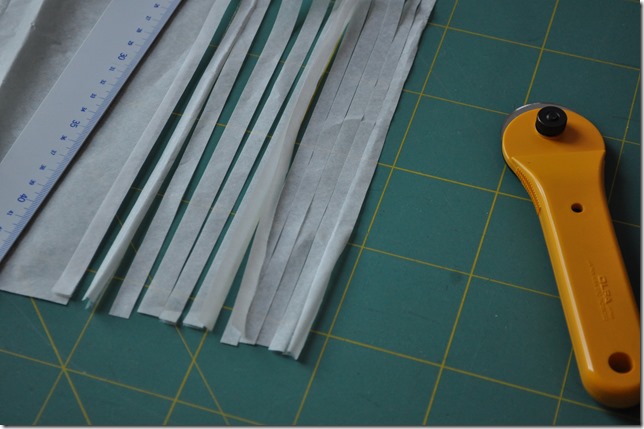