Glad I made a muslin 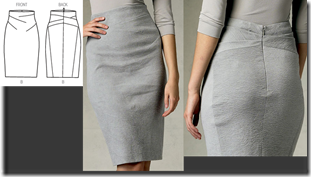 I’m in a mood for skirts, have sewn two recently (one not blogged about yet). Last year I bought Vogue 1389 for the skirt pattern. I like the jacket too, would only sew a real lapel collar but the skirt had a special appeal to me. Learning how to draft patterns does not mean I’m not using patterns any more, some are intriguing to learn about the way they are drafted. This pattern is one of those.

It has two main pattern pieces if you don’t count the facings and there is no side seam. That seam is drafted a bit more to the back . The upper part with the darts is a combined front/upper back pattern. Difficult to trace between sizes, therefor I took the size by hip measurement. I was inclined to use my fashion fabric (a teal linen) but decided to make a muslin first. Glad I did. Barely enough room at hip height but way too much fabric in the waist. I have no idea (yet) how to solve this. I might just take my skirt draft and make something similar. I just can’t do without a vertical line somewhere. I’ll keep the muslin and take it to class when it starts again in September, see what my teacher thinks.

On a side note: the instructions are pretty difficult as they have you sew the dart till halfway, then turn and fold and stitch the remaining half to the facing, which is attached prior to sewing the darts. No way I’m using a facing in a muslin phase, I’ve sewn all the darts from beginning to end which worked fine. When you read this and want to try this pattern using Vogue’s instructions, I would advise a muslin, as there is no way to alter at the waist later. 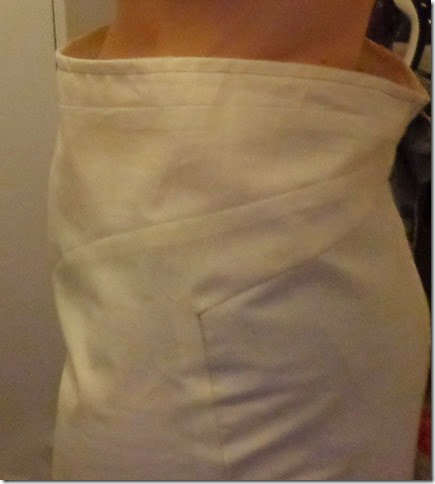