StyleArc – Kellie top – how a summer top became one for fall 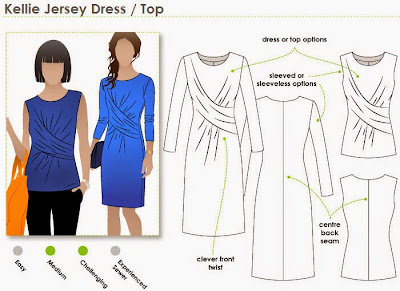 Not the best photos and not the best top I ever made. For being a relatively easy knit top I had a lot of problems with it. The journey of this top started when visiting my sewing friend Joana. She had made this top and I tried it on. Despite being a size smaller than I’ve used before for StyleArc patterns, the fit was quite good, so I used her pattern.

When it came to construction I was working on my own again. The top has an inner part that also is the facing for the neckline and armholes in the sleeveless version. It has been a long time since I used such a construction, and I was rather tired, so I thought I’d better use the order of construction as in the pattern instructions. Wrong decision, for the sleeveless version they are incorrect. If you want to do the neckline and armhole facings the side seams have to be left open till the last moment. That is what I forgot and what Joana told me when I asked how she had constructed her version.

I left the top alone for a few days and reworked the neckline (why is it that topstitching with the coverstitch always unravels easily, except when you want to get rid of it). I would advise some interfacing in the neckline as mine was gaping. I’ll leave it as is now but next timeI will possible use another neckline finish and I will make it a bit deeper at the front. About an inch I would think.

I had more fabric and decided to insert the sleeves. Easier than unpicking my serged seams So instead of a summer top this now is my first fall-top. Despite my struggles I will use the pattern again. 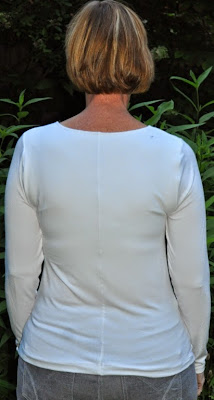 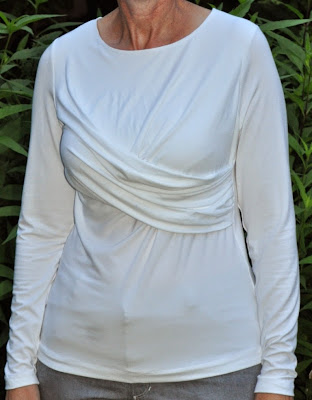