Thank you for your suggestions on my fabric choice. I will sew it next week, and decide then what to do.
You might know that I’m not sewing dresses often, and now I’ve sewn my second dress within two months. It’s number 12 from the Knip Mode February issue. 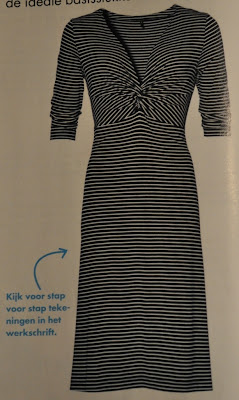 I love to wear the blue knit dress I made end of November, and thought it would be nice to sew this one. Suggested are “step by step intructions” in the center of the magazine, but these are not there. I could have used them. I made a Jalie twist top a long time ago, and thought I would sew the front in an hour or so (ever optimistic). The first evening I pinned in several different ways and didn’t get it. Concluding I was too tired to understand it, I left it. But even at the second attempt it took me quite a bit of time to grasp what was intended.

ETA: when I was looking for the instructions on the Knip mode website, there were none (last weekend), now they are here. Thanks Margreet for mentioning this. I used my normal size 40 for the upper part, tapering down to size 42/44 at hip height, which gave me perfect fit, no other changes).

Might have been me, but for those of you who might want to make this dress, this is how the notches come together. The yellow arrow indicates the opening. 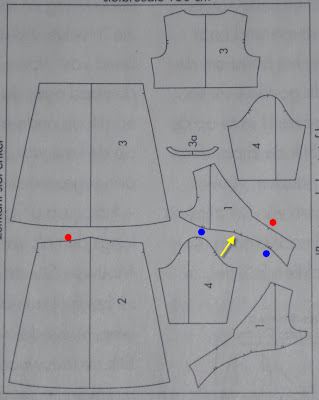 And finally:  the result of the dress on me:

The neckline is as low as shown in the magazine, so I’m wearing a camisole unterneath.
op January 23, 2011