Two buttons to attach, then the jacket is ready for making pictures. As it’s 11.30 pm now here, that will be for tomorrow.

Below are pictures from the jacket as it was about a week ago, still unlined. I had a problem with the color of the zipper tape. I decided on an impulse to make this from the fabric I had taken with me to the house of my friend Valerie. Then I had to buy the necessary notions like the zipper after starting construction. Difficult, the color range of (separable) zippers is not very large here.

Burda’s instructions let you cut a piece of fabric and press that in 4 layers (front + back + 2 times seam allowances) and fold that around the zipper tape. Too bulky anyway, but think of the top and bottom of such a construction. Valerie suggested using a ribbon instead, which was a good idea. But also difficult to find in the right color, as my fabric has difficult “pearl/oyster?” shades.

The first picture is the zipper without ribbon. Too dark but the best I could get! The second an off-white ribbon. In the shop I thought it would be ok, but too white and too much shine. 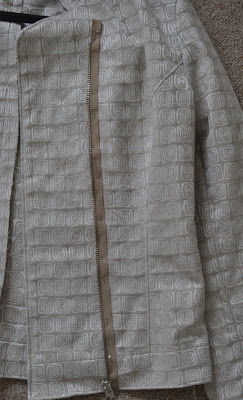 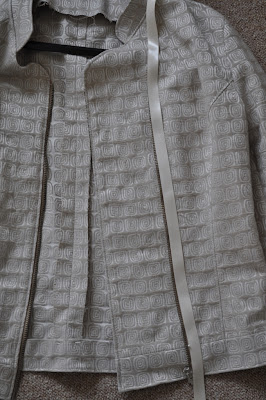 This is the ribbon I used in the end. In the picture it looks a bit dark still, but it’s fine. 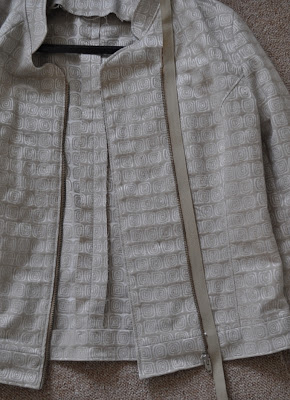 Another option would be to make a seam in the left part of the front and sew the zipper in the seam. I only thought of that option after having cut all parts with only scraps left (of course!).

First I basted it to the jacket and then stitched it on both sides. This will be the first item for spring. I’m so longing for a bit of sunshine. 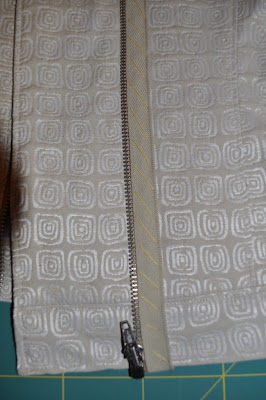 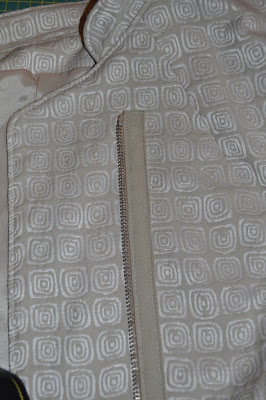