My next project (part of a mini wardrobe, more on that later, still planning) is a white blouse, no. 104 of the February BWOF issue. I have traced the pattern two weeks ago, did a FBA. But I had not checked the depth of the neckline. Before cutting the fabric, and based on my experience with the jacket I did check. Guess what: it's too low.

I could have known, based on the pictures in the magazine. Now I checked, and see what they did to the pictures. The red dot on the white version marks the top button, which is not so clear in the screenshot. The collar is folded higher than the roll line, which in this pattern is actually a seam. I don't often wear a scarf in that way, but it would help to cover up.

In pattern 103, which is basically the same pattern, the models hair covers the neckline! Conclusion: my hair is too short! 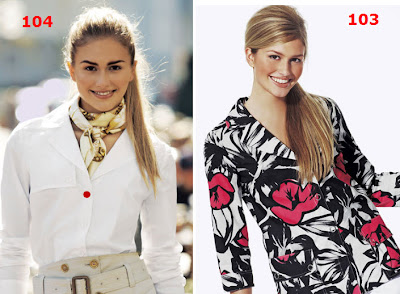 Though I love BWOF very, very much, I would like it if they made their necklines a tiny bit higher. If even their photographer needs to cover up, we (= the actual women who wear the garments that are made from the patterns) mostly will have to adapt the pattern, which is what I'm going to do (my hair won't grow fast enough :).