What will fall bring? 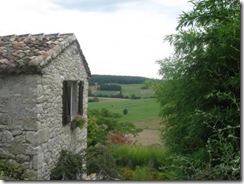 I'm back from a two week holiday in France. This is a picture from the view we had from the house we rented in the second week. A lovely place, the owners did all to make it a comfortable holiday home. Wish I had a view so lovely from my own house.

Before the holidays started there was no time to sew, and I really hope to be sewing again very soon. Just now there are just a few plans in my head. As an advertisement campaign on the internet seems to pay off with quite a few new prospects for my business, I need a bit more working clothes to visit potential customers. It will all be not very formal, as the general clothing style in the Netherlands is rather casual. So no black or blue suits, but a pair of pants with a pretty blouse/top and (depending on the weather) a jacket is the style I'm thinking of.

I'm doubting to write about the plans I have, for the reason that a) there won't be enough time to make all that I plan anyhow, and b) I tend to change my plans very often. Thus I'll just write about the projects I'm actually starting. The next project will be a pair of Patrones pants I promised my daughter.

But first I'm going to scan through the pattern reviews and some of the blog posts that were published during the past weeks on the blogs that I subscribe to. There were over 350 new posts in Google reader, so I won't have time to read them all, what a writing lot we all are, it's fun.

Hope you all are well and making your fall plans (or spring if you're on the other side of the globe).