At the moment I’m working on pattern drafting, as you may have read in earlier posts. Following this interest I recently discovered the blog Well Suited by Studio Faro. I have mentioned this too. 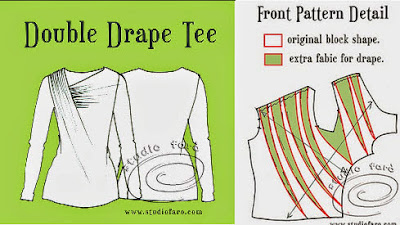 I’m quite intrigued by some of the pattern drafts Anita is publishing. Some are quite complicated but the Double Drape Tee did not look that difficult, so good for a first try. I did use a Jalie t-shirt pattern as a base, not having done my own knit block yet. I could have drawn a basic sloper with no ease I presume, but well, this was around. Not a good idea, see the end of the story.

This is how I worked it out.

The front pattern of the shirt was cut as a complete pattern, as the top is not symmetric, no cutting on the fold possible. Especially at the top you can see a lot of drafting lines. I realized that my initial lines were too high and I had to use the lowest point of the neckline. The Jalie pattern is for a t-shirt pattern with a high neckline, so making a line higher than the lowest point of it would not feel comfortable (I don’t like the feeling of a turtle neck for example) and even more important, not what is intended with this style. 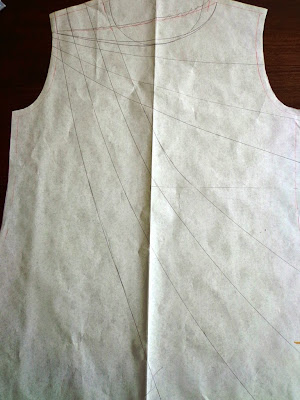 The next step was tracing the top part because of the overlapping parts. 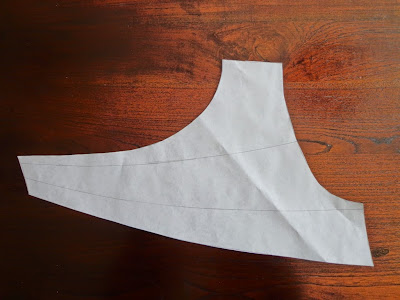 I’ve cut the lines to the edge, leaving only a little point closed (I removed the seam allowancse). 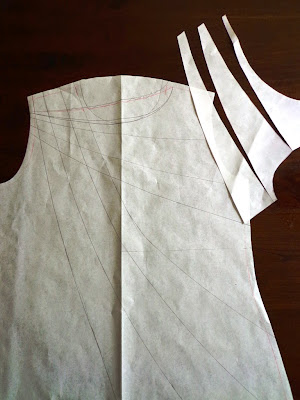 Then I slashed the main body part and traced this to be the front pattern. 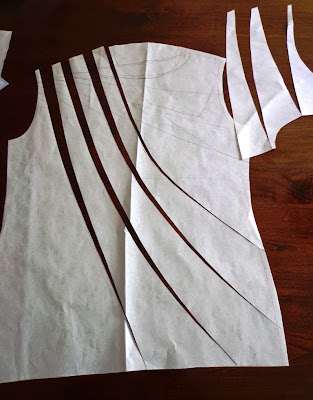 The front pattern completed. Looks a lot like the draft from Studio Faro, doesn’t it? 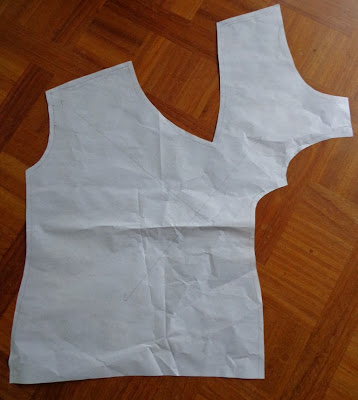 I pinned in on my dressform. Now I had to think on how to finish the neckline. I decided on a one fold binding. 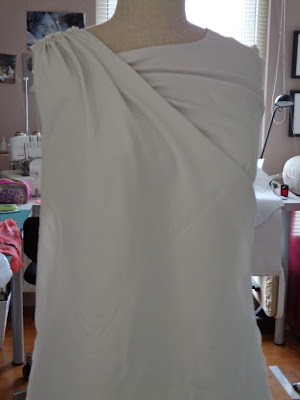 The result on me doesn’t look as good, but the idea of the pattern works. The Jalie pattern is too small in the sleeves and looks like the shoulder on my left side is not good either. Also a little tweaking is in order on the diagonal line, but that would have been an easy fix.

For me this is mainly a “proof of concept”, working on pattern drafting techniques. It would have been nice if it had been a wearable garment but I’m not that sorry it isn’t. The main reason it does not work for me is the base I started with. Lesson learned.
I like the style and might try it again (some day) with another fabric. As I don’t like my necklines so high I would draft it lower as well. 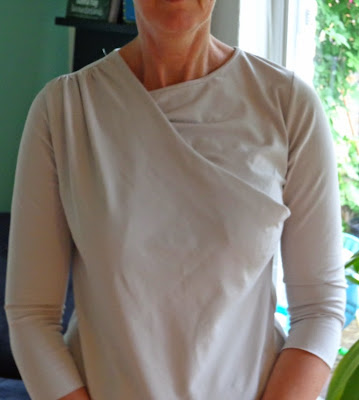