First steps on a blouse

As I mentioned in my last post I plan to enter the “one pattern, many looks” contest on Pattern review. I haven’t entered a contest for a long time and as I already planned to make a few blouses this is a good incentive. I know I’ve had plans for entering a contest before and not completing anything, therefore I have chosen a relatively easy project: a classic blouse. I plan to make 3 variations this month. One of them will probably a completely white version, one a printed or striped one and the one I’m working on is a white version with trim. Nothing spectacular but nice to do.

I’ve used the pattern before, it’s April 2010 Burda, number 114. The blouse with flower print that because of the colors and print I have hardly worn. But the pattern is good.

The trim and buttons (Chinese knots) I bought in Paris at “Le droguerie” last October. It’s Liberty fabric bias tape that I’ve pressed in two layers instead of four and use so that only a small strip is visible. There is a little structure in the fabric that once pressed shows these little threads at the edge. I had not noticed it when I bought the trim and was a bit disappointed. I’ve got used to it and accept the irregularity it creates.

Strange as it may seem, I sewed the sleeves first. The following photos give you an impression of what I’m working on. 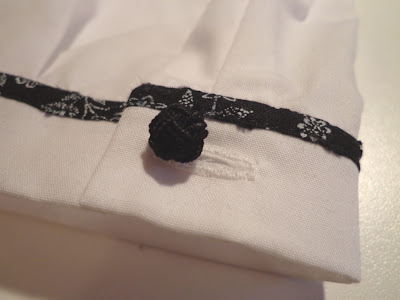 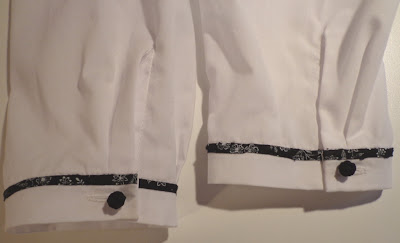 The center front and collar stand in progress. 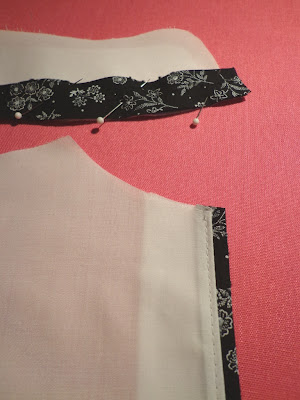 No sewing on Saturday, too many other things to do and a dinner out. Hope to have some progress on Sunday.