The past week I spent my sewing time with this jacket from Knip Mode March. I liked it mostly from the line drawing, as the pictures don’t show it too clear. Though it’s a good example what a different look you get from using a differnt fabric or when wearing another style clothes with it. It has sleeve vents, single welt pockets and a collar with a corner taken out of it (don’t know how to say this in English). 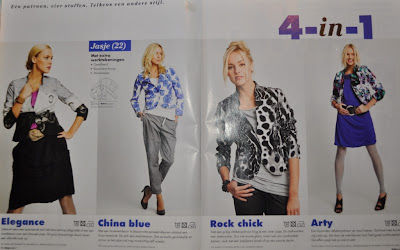 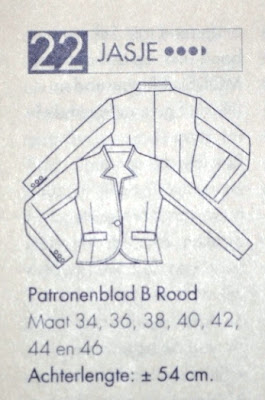 The fabric I used was from my stash, bought last year in a sale for about the same price as muslin fabric. I skipped the muslin stage for that reason, just wanted to see how an unaltered size 40 would be on me. That size is the correct bust size for me. My experience with Knip Mode is that I don’t have to alter the length above the waist, as they draft for taller women than Burda does.

That assumption was right, but I don’t quite like the result on other points. And strange enough: half way this week when I tried it on I thought it was better.
The bust dart is not in the right place (too much to the side) which gives strange space at the sides. In the picture this is even exaggerated, as I am standing and DD kept sitting in her chair while she took the pictures. 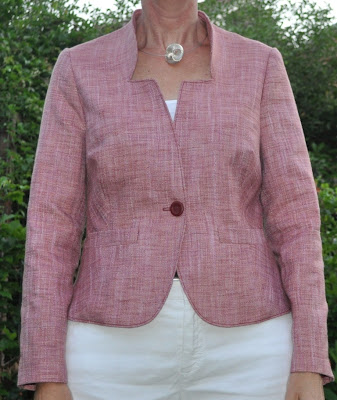 The sleeves might be a bit longer as well. 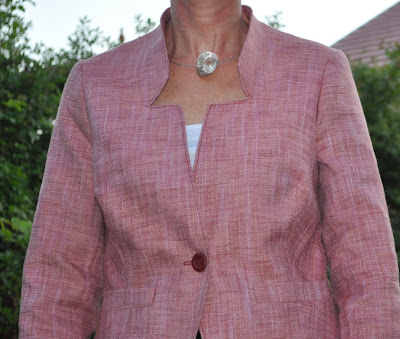 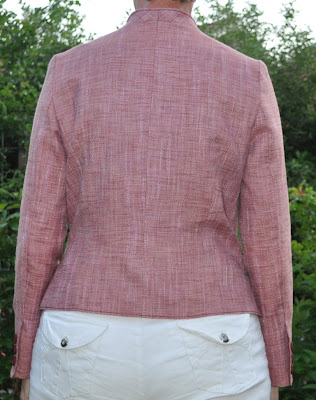 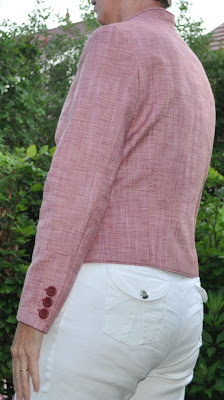 Also the opening in the collar is a bit lower than I thought it would be and around the bust it tends to go outward. I´m inclined to say that a button would be needed higher on the front as well, though there´s no space for it.

I think the issues have to do with my figure more than with the pattern, which was drafted well and was in general not too difficult to sew. For the single welt pockets I referred to Kenneth King´s book Couture techniques and the sleeve vent I used the tutorial I once made myself (see the tab Tutorials above).  The sleeve went in very smoothly and didn’t have too much ease. I added a sleevehead but no shoulder pads.

For me this is another “result not as expected/planned” project, nothing really lost except time, but it confirms the need for a muslin when I make a new jacket pattern. I worked on this jacket almost every evening in the past week, which is a pity if I won’t wear it. A muslin would have cost me only one evening.