It’s been a long time since I’ve sewn a skirt. From my reviews I learn that the last one has been September 2009, over a year ago. I’m usually attracted to skirt patterns that have something special. This pattern is an example of a pattern I’m immediately attracted to, though I’m not sure whether the style will suit me. One thing I find dificult with skirts is to find something to wear with them. 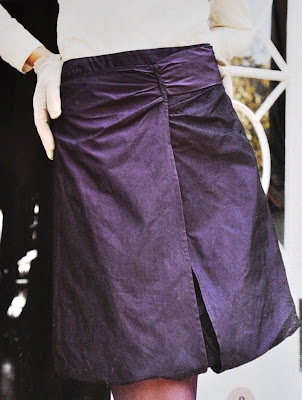 I’m making this from a rtw skirt I bought last year. Lots of fabric that had to be draped, held together with two buttons and small belt. I never managed to drape it again as it was done in the shop, it always looked strange and  I never wore the skirt. But it had a lot of fabric in it, which I use now. It’s grey/blue in color with black (or very dark blue) dots. It’s not very difficult till now, the picture shows the detail that you see in the magazine picture too. Don’t think it will be finished this weekend, the Dutch have “Sinterklaas”, a local variety of Santa Claus, and I’ve some preparations to do for that. I wrote about that tradition in this post (3 years old, time flies!)

The pattern is again from the December Knip Mode, like the blue dress of two weeks ago.