Top for my daughter

Last week Lindsay T wrote about sewing for her daughter that her modus operandi is: "make it fast, make it easy". She's right, when the lifespan of a garment is one season, I don't make it very difficult either, certainly not on a summer top like this.

In the BWOF top I omitted the lining, there's no real need for it, and there are layers enough.... 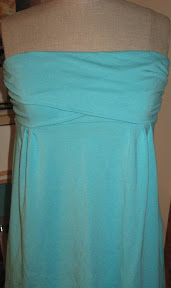 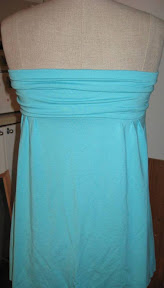 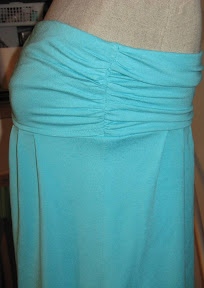 From the point that I wrote about yesterday, my next step was to measure the length of elastic needed on my daughter. Don't know if that's close to what BWOF gave as length, I go for what is wanted.

I sewed the elastic in the round, measured it in 4 equal pieces, did the same for the top of the dress and stitched the elastic to the wrong side of the top, in the seam allowance (DD cut this top, she's not cutting very straight lines yet, no problem really, as we mark actual stitching lines).

Before folding I trimmed the seam allowances at the turning point of the side seams. 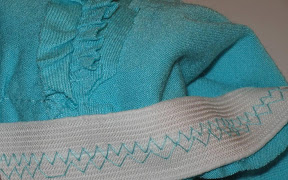 Then I stitched with a zigzag at the top of the elastic (still at the wrong side). Then turned the elastic and stitched in the ditch at the side seams. The elastic is not visible from the inside. 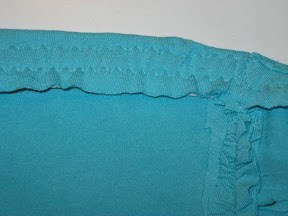 That's all I did. In wearing this top it must become clear whether this is enough and the elastic stays in place and will not turn. I don't think it will, it's wide (the extra zigzag you see in the picture is because it's "maternity" elastic, the only wider elastic in the house, I used it sometimes in pants for my children when they were much younger). Inside it could be neater, but I'm not going to bother.

In the way I did this, there are far less layers at the seam than in the way BWOF described. In this case I don't understand the pattern makers.

BTW: Marita made it too for her daughter, and is going to write how she did this top and will probably have another take on this pattern. It's good to know that the problems with this top can be solved in more than one way.

Pictures on my daughter later I hope.